Forget Elon Musk’s Tesla Cyberquad ATV because there’s a new form of transportation for the offroad enthusiast now available, and it looks like something out of Star Wars.

Sweden’s Jetson Aero has begun manufacturing a personal electric vertical take-off and landing (eVTOL) aircraft that will zip around the skies at 63 mph. 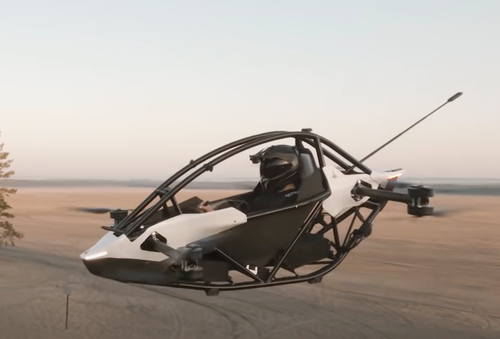 The Jetson One eVTOL is an octocopter with four arms that produce 88 kW (118 horsepower) at full throttle. The pilot sits in an aluminum/carbon fiber frame and controls the craft via a throttle lever on the left, a joystick on the right, and a pair of pedals, likely controlling yaw.

According to vehicle car website Autoevolution, “the company [Jetson Aero] said that you can easily climb as high as 1,500 meters (4,921 feet) with Jetson One.” So far, videos only show the eVTOL moving at high rates of speed at low altitudes.

Someone who weighs roughly 187 pounds can expect 15-20 minutes of flight time before the batteries need a recharge.

New Atlas noted the eVTOL comes 50% built, and presumably, owners will have to assemble the rest. For that reason, the craft will likely fly under “experimental” where pilots don’t need a license to fly.

As for price, a $22k deposit will give someone the right to reserve a build slot for 2023. There are only three left. Production in 2022, a total of 12, has already been secured from people worldwide, including a few in California.

Personal eVTOLs appear to be the next big trend in transportation that will revolutionize how people (rich people) travel and commute or spend their leisure time.