Will Beaten Down Chinese Stocks Be 2022’s Best Performers

Chinese stocks became the pariah of the investment world last year, with the MSCI China Index losing 23%. But as the new year sees global risky assets falter, the Chinese benchmark has been surprisingly resilient. Recent history shows that winners and losers tend to flip in the new year. While that may be too simplistic of a framework, it still should not be too surprising that MSCI China is performing well in 2022 on expectations of policy easing.

The global risk markets’ poor start to the year extended on Monday. Whenever real yields shoot up as quickly as they have, it tends to ripple through markets. Yet, the Move index of bond volatility failed to increase, suggesting that investors see limited upside for yields from here. Meanwhile, if we look at the cyclical/defensives ratio, it’s been moving higher with yields, signaling the markets have upgraded their growth outlook. That view may be reinforced by encouraging signs that the omicron infection has possibly peaked in places such as New York. All together, the probability of a deeper global market correction seems low. 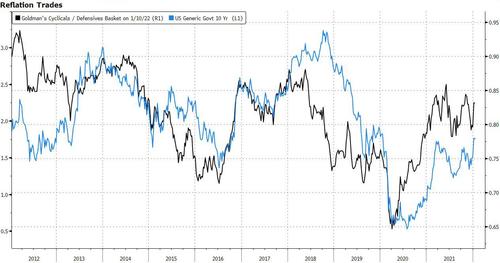 While U.S. investors are grappling with tighter monetary policy, the drumbeat of easing in China is getting louder. Last week, a senior government official reminded us that ensuring growth stability is not only an economic issue, but also a political one ahead of the power reshuffling later this year. On Monday, a cabinet meeting chaired by Premier Li Keqiang vowed to accelerate investment in key projects and boost domestic consumption. Meanwhile, media reports that officials in Guangdong province are encouraging state-owned enterprises to acquire struggling developers led to a rally in property stocks.

It remains to be seen what appetite Beijing has for stimulus, especially regarding its policies on the housing market. But the prospect of easing is one of the necessary conditions for the Chinese equity market to perform well.

In recent years, MSCI China has been either one of the best or worst performers in global assets, as shown in this table below compiled by Morgan Stanley. When it sat at the bottom, it tended to come back with a roar the following year, and vice versa. For instance, the MSCI China Index’s 19% loss in 2018 was followed by 24% gain in 2019. And going long 2020’s loser (REITs) and short its winner (MSCI China) would have been a terrific trade last year. 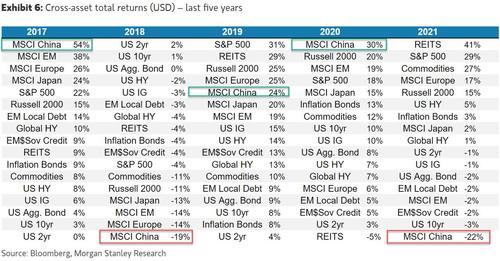 Morgan Stanley’s analysts think it’s too early to call the bottom on Chinese stocks because the downward revision to earnings estimates is not finished yet. And the ranking is not adjusted for the assets’ volatility. So it’s not surprising that high-beta assets such as Chinese stocks tend to be either the best or worst.

Still, the MSCI China managed to limit its decline this year to 0.7%, outperforming the 2% decline in the S&P 500. It’s a promising start.

Dominion Voting Systems will not seek a settlement in its $1.3 billion defamation lawsuit against prominent Trump supporters including MyPillow...

An F-35 fighter crashed on the deck of the USS Carl Vinson aircraft carrier Monday while the carrier was on...