While President Joe Biden has portrayed anyone supporting the filibuster as a virtual confederate sympathizer and Bull Conner wannabe, the attacks did not sway senators like Sen. Kyrsten Sinema, D-Ariz. who defiantly went to the floor to deliver a speech calling for the end of the politics of division. She, and her colleague Sen. Joe Machin, D-W.V., stood firm in support of the filibuster. The response from the commentators on the left was pure unadulterated rage. Many like MSNBC Lawrence O’Donnell cruelly mocked her from appearing emotional. However, one of most chilling attack came from a reported staff member at the ACLU, Sarah Michelsen, who encouraged people to keep up the pressure to “break” Sinema. The senator has been continually harassed by activists, who even followed her into a bathroom to berate her. 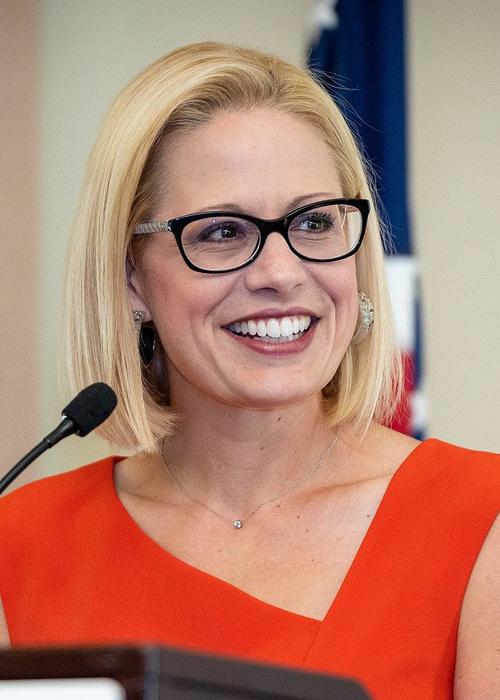 Michelsen, a former state director for Sen. Bernie Sanders’ presidential campaign, is a “senior strategist” at the ACLU. Like many, Michelsen seemed thrilled that Sinema seemed emotional in her speech and encouraged activists to “keep going” with the attacks because they are “breaking her.” 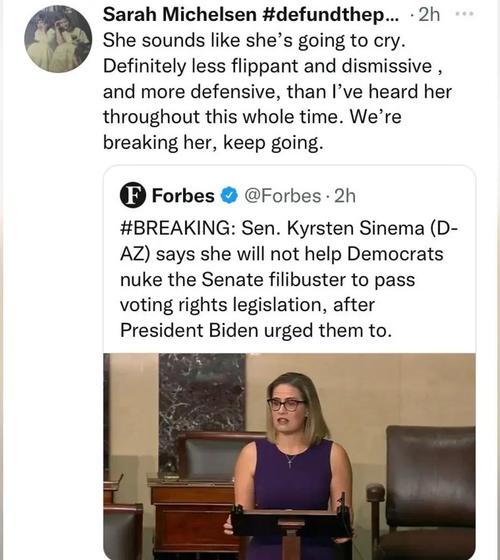 Michelsen seemed to be following the lead of President Biden, who was widely criticized for his Atlanta speech declaring that anyone supporting the filibuster was attacking democracy and supporting autocracy. He continued the attacks yesterday on the Hill despite the fact that he was clearly not intimidating either senator into changing their positions.

It did not matter that Biden showed equal passion as a senator to denounce those who would find excuses for abandoning the filibuster rule. He called such efforts “disastrous” and proclaimed: “God save us from that fate … [it] would change this fundamental understanding and unbroken practice of what the Senate is all about.”

After six months of uncomfortable silence as president, Biden later said that, as president, he continued to support the rule. Putting aside certain factual and historical errors, Biden declared that killing the rule would “throw the entire Congress into chaos and nothing will get done. Nothing at all will get done.”

Despite the support of the rule by figures from Barack Obama to Chuck Schumer, it is now officially a “relic of Jim Crow” and open season on anyone standing with the senate tradition.

The tweet from Michelsen was particularly disconcerting coming from someone associated with the ACLU. We previously discussed the disgraceful attack on Nicholas Sandmann by ACLU lawyer Samuel Crankshaw, who opposed his being accepted into college. This was after Sandmann was shown to have been falsely accused of harassing a Native American activist in front of the Lincoln Memorial. Nevertheless, even as media companies settled lawsuits with Sandmann for defamation, figures like Crankshaw and writers like Above the Law’s editor Joe Patrice continued to attack him.

For those of us who have long supported the ACLU, the organization has changed dramatically in the last ten years to a more political organization. It now opposes due process rights when they support the wrong people — a striking departure from the traditional apolitical stance of the group. At points, it has become a parody of its own self like celebrating the legacy of Ruth Bader Ginsburg by editing her words as offensive.

It is not clear what Michelsen did or does at the ACLU. Her Twitter account was taken private after her attack on Sinema. The account calls for defunding police and chaos. 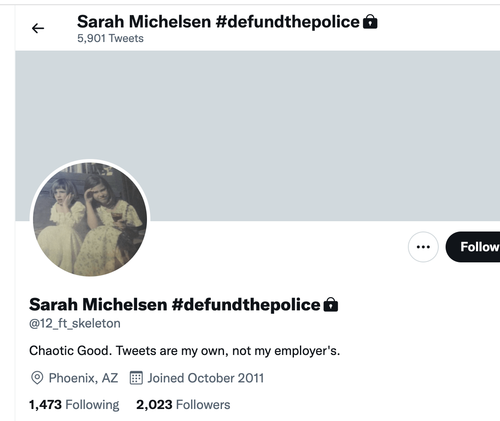 What is most notable about Michelsen’s attack (like the diatribes of President Biden) is that they are clearly not working to intimidate these senators. Yet, activists still want to continue them because they can. The age of rage gives them license to hate and harass. That is enough to “keep it up” in harassing those who hold opposing views.

We stand with the Canadian Freedom Truckers. Read the full post at Red Voice Media.

Let's see how long it takes Hollywood to cancel her. Read the full post at Red Voice Media.

Ben Bergquam of Real America’s Voice is on the Rio Grande today reporting on how the Mexican drug cartels are... 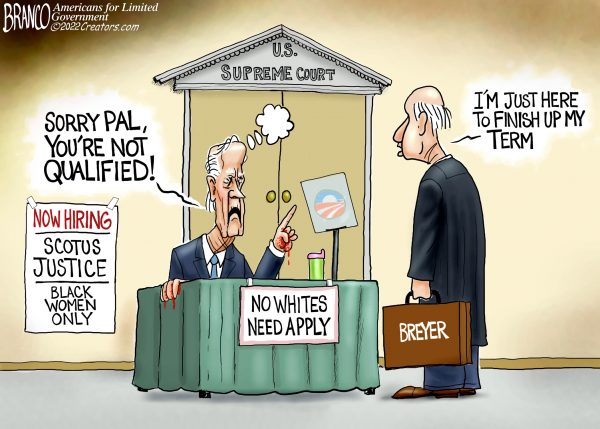 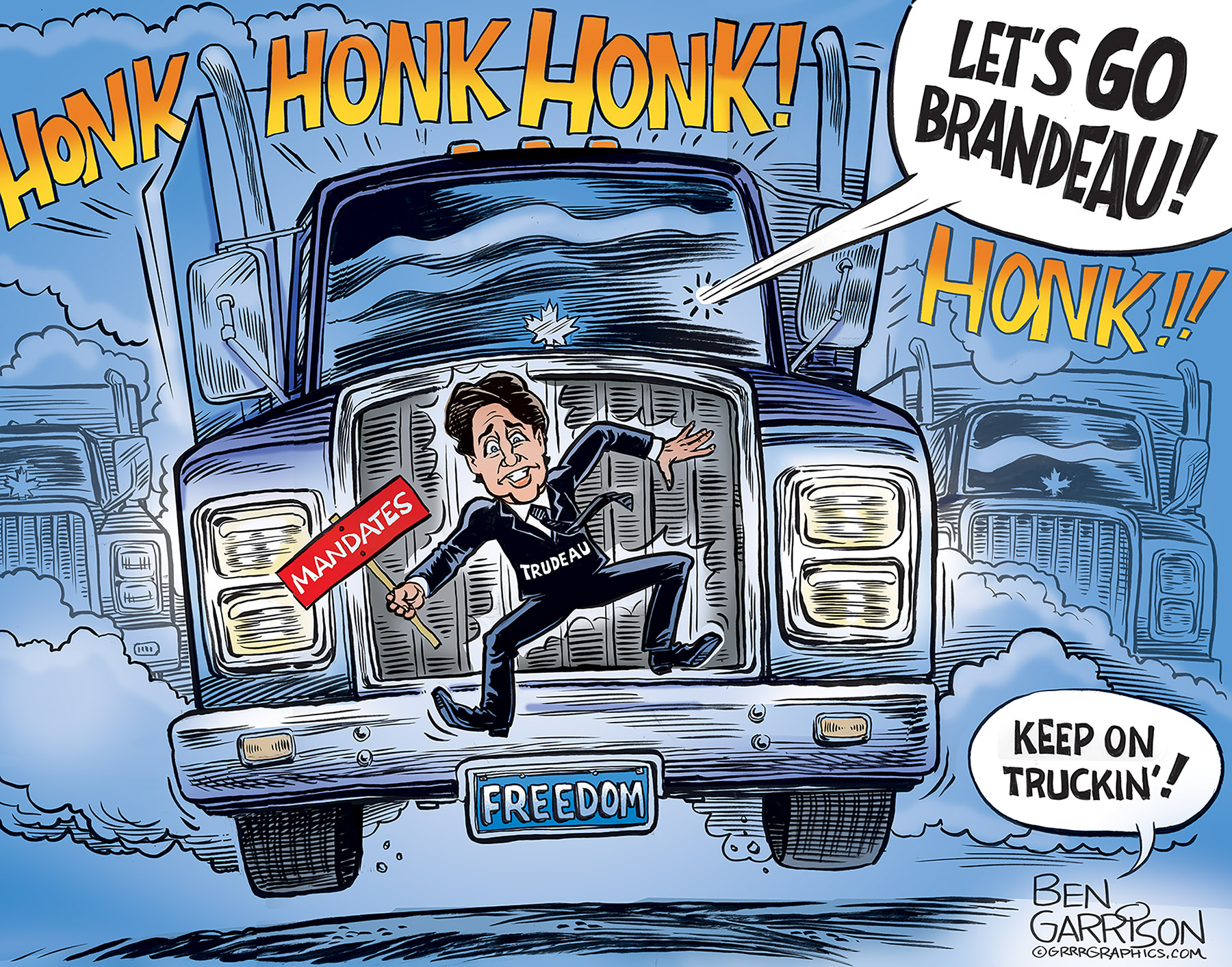