Update (1320ET): The suspect in the Waukesha mass murder, Darrell Brooks Jr., was released on an ‘inappropriately low’ bail on November 11 in an unrelated case, after posting just $1,000 cash bail following charges of Second Degree Recklessly Endangering Safety, Felony Bail Jumping, Battery, Obstructing and Officer and Disorderly Conduct in an existing case against him, according to Milwaukee County DA John T. Chisholm.

Meanwhile, CNN is doing its best to push the narrative that Brooks – a BLM supporter whose social media accounts are riddled with anti-white hate speech, was simply fleeing a crime he had just committed and that slamming into the parade was an accident.

Exactly. Anyone that lives in an around Waukesha knows this. https://t.co/tlg2A09dap

Darrell Brooks, the suspect in the Waukesha attack, posted a whole bunch of anti-white posts on Facebook, where he weighed in on the Kyle Rittenhouse verdict and called for violence against white people. pic.twitter.com/qDMJDRHNCJ

What’s more, Brooks was accused in his most recent case of “purposefully” running a woman over with his vehicle.

🚨🚨🚨NOT THE FIRST TIME *this month* that Waukesha suspect Darrell Brooks Jr. has been accused of trying to run people over!

Update (0830ET): As independent journalists and the MSM race to shape the narrative surrounding the alleged Waukesha attacker, one thread has exposed him as a potentially admitted child sex trafficker.

This is Darrell Brooks Jr.

He killed at least 5 and injured 40+ when he plowed into a Christmas Parade.

He was released on $1,000 cash bail just two days before the attack and has an extensive criminal history.

Why was he allowed back on the streets? pic.twitter.com/iQSjOG5h1N

He is an admitted child sex trafficker. pic.twitter.com/h1O7Ef8Xr6

We’ll leave digging through the detritus to our readers.

Update (0600ET): Overnight, the City of Waukesha has confirmed that the body count for last night’s horrific attack at its Christmas parade has risen to at least five, while more than 40 have been injured. The local PD has also confirmed a person of interest is in custody, as we reported earlier.

At this time, we can confirm that 5 people are deceased and over 40 are injured. However, these numbers may change as we collect additional information. Many people have self-transported to area hospitals. The Police Department has the person of interest in custody.

The section of Main St. worst impacted by the attack will “not be open” before mid-day tomorrow.

The City Council has asked that all items intended for a memorial be placed at Veterans’ Park.

When the area is open, the City is requesting that any items for a temporary memorial be placed at Veterans Park.

Many people witnessed traumatic events this evening. If you need to talk with someone, please call 211.

Overnight, the city said the scene was “still fluid”, but across the country, journalists and ordinary Americans are waiting on the next update after a man drove his Ford Escape through a barricade and onto the parade route of the city’s annual Christmas parade, causing immense damage and loss of life.

The scene is still fluid, and the investigation is ongoing. The community mourns the loss of our community members and those injured. We are asking for the community to come together during this time and to keep the families in your prayers.

According to Red State, the NY Post and others, a person of interest has been identified as Darrell Brooks of Milwaukee. described as a “black man with dreadlocks” who was released on cash bail a few days ago.

Audio recorded by local independent journalists off police scanner chatter has police identifying the suspect as a “lighter skin, black male, dreadlocks, possibly no shoes”, which matched the description from several outlets.

I can confirm, as I have his birthday, that this is the man in custody in Waukesha. https://t.co/5xlJEc34Rm

Info from the Wisconsin Courts page about Brooks shows his cash bond was posted just a few days ago; he is scheduled for a Zoom hearing just a few days before Christmas, according to WI court records. 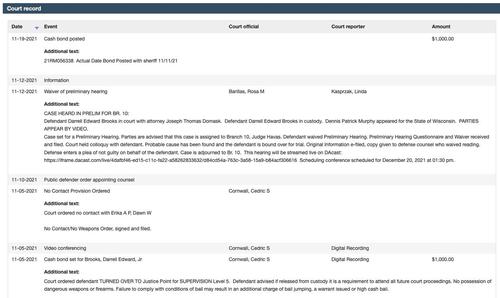 Tipsters have also stumbled upon a Soundcloud page allegedly belonging to Brooks which included rap tracks with anti-Trump lyrics. They also featured samples of Malcolm X.

The question now, as Laura Loomer noted overnight, is who exactly paid for Brooks’ cash bail? Meanwhile, local authorities said the next press conference will be held at 1300 local time on Monday.

Update (2015ET): A person of interest has been taken into custody following today’s horrific attack at the Waukesha Christmas parade according to VOA News‘ Steve Herman.

In addition to several fatalities, eleven adults and twelve ‘pediatric patients’ have been transported to local hospitals according to the fire chief.

“There were some fatalities:” Waukesha fire department officials say they have transported a total of 11 adults and 12 pediatric patients to area hospitals. pic.twitter.com/QzXBGlQAMF

Update (1940ET): Footage of the moment the SUV began plowing into parade participants has emerged.

TRIGGER WARNING: 🚨DISTURBING VIDEO🚨A viewer sent in horrifying video the moment a red SUV plowed through a crowd during the #Waukesha Holiday Parade. Its currently unclear how many people have been injured. Updates to come on @tmj4 pic.twitter.com/u6q10VgTJ1

Police have issued a Public Safety Alert asking people in Waukesha to shelter in place. pic.twitter.com/fjF0k0tIQB

A mass casualty event has occurred at the Waukesha, WI Christmas parade, after a red SUV allegedly broke through the police line, plowed through pedestrians, and began firing round out of the window. It is unclear at this time how many people have been injured or killed, however at least four people have been reported as having been hit and ‘not moving.’

The driver has not been identified as of this writing.

You can see a red SUV speed right past these band members, hear screams and then a law enforcement officer running. @fox6now pic.twitter.com/8lO5oRuP1I

According to WISN‘s Courtney Sisk, the SUV hit the “dancing grannies” before speeding off, leaving “at least four members” on the ground and were not moving. One of the group’s members reportedly flew ‘over the hood’ of the SUV.

Reports of mass causality in Waukesha. An SUV plowed through the Christmas Parade. Witnesses on the phone just told me several members of the “Dancing Grannies” were hit and are not moving. We are on the way. @WISN12News pic.twitter.com/DvoJKg3KzI

“At the Waukesha Holiday parade and a car just broke through the police line, plowing through pedestrians and firing rounds out the window. Family and I are safe. Happened 20 feet in front of us,” wrote Twitter user Zach Heisler (@zrheisler).

At the Waukesha Holiday parade and a car just broke through the police line, plowing through pedestrians and firing rounds out the window. Family and I are safe. Happened 20 feet in front of us.

#Update: Video of the scene right now in #Waukesha in #Wisconsin after a car ploughed his way through people of crowds, injuring up to at least 30 people. pic.twitter.com/mcQpgGxZDo