MSNBC took five minutes out of its race baiting coverage of the Rittenhouse case to remind its extremist viewers (there can’t be many left) that Thanksgiving is coming up and that it is a celebration of… you guessed it, white supremacy. 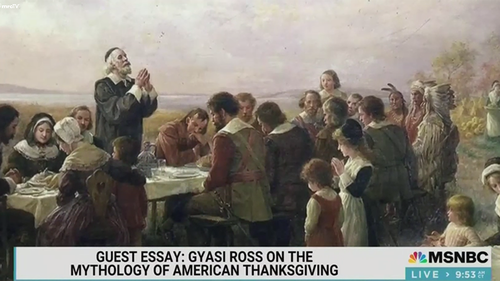 Tiffany Cross, who earlier had called Kyle Rittenhouse a “murderous white supremacist,” handed over a segment of her show to Gyasi Ross who declared that the holiday is part of the “pathology of white America” believing that they have improved the country.

“But I’m still trying to find out what indigenous people received of value,” Ross proclaimed, adding “Instead of bringing stuffing and biscuits, those settlers brought genocide and violence.”

He further declared “That genocide and violence is still on the menu as state-sponsored violence against Native and black Americans is commonplace. And violent private white supremacy is celebrated and subsidized.”

“Black people are still being murdered by those paid to protect us,” Ross added in a rant against police.

He continued, “white Americans are still killing Native and black Americans with no fear of reprisal. They brought chattel slavery to Africans and Native people that still happens through the prison-industrial complex that imprisons the descendants of enslaved Africans and Natives at far disparate numbers.”

“That is the reality of Thanksgiving,” he concluded.

These people are truly insane and desperately want Americans to violently hate each other.

This woke nonsense comes around every year now, but as we have previously noted, the majority of Americans have no tolerance left for it.

Brand new merch now available! Get it at https://www.pjwshop.com/

In the age of mass Silicon Valley censorship It is crucial that we stay in touch. We need you to sign up for our free newsletter here. Support our sponsor – Turbo Force – a supercharged boost of clean energy without the comedown. Also, we urgently need your financial support here.