A dramatic scene unfolded in Los Angeles Sunday afternoon, after several LAPD officers pulled a pilot from a downed plane just seconds before a commuter train plowed into the damaged aircraft. 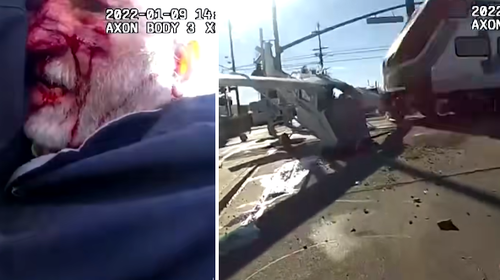 The pilot of the small plane made an emergency landing on the tracks in Pacioma at approximately 2pm after losing power, according to Police.

In bodycam footage of the incident, the bloodied man can be seen getting hauled out of the plane by officers while someone shouts “Go, go go!” as the train blasts its horn and plows through the craft.

Foothill Division Officers displayed heroism and quick action by saving the life of a pilot who made an emergency landing on the railroad tracks at San Fernando Rd. and Osborne St., just before an oncoming train collided with the aircraft. pic.twitter.com/DDxtGGIIMo