Authored by Tim Hakki via Decrypt.co, 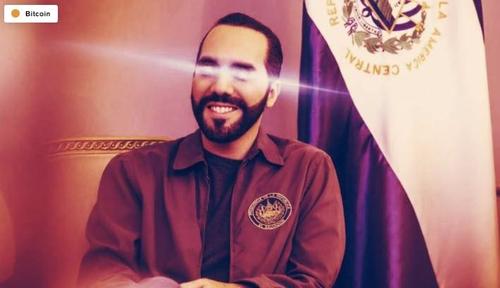 Nayib Bukele, the Bitcoin-friendly president of El Salvador, said at a Bitcoin investment summit on Saturday that his country plans to build the first “Bitcoin City”.

The city will be located in the eastern department La Unión, between the municipalities of La Unión and Conchagua.

The initial costs for developing the so-called “Bitcoin City” will be funded at the outset by the issuance of Bitcoin-backed billion-dollar bonds in 2022.

Bitcoin maxi Bukele appeared in person to deliver his address at the close of a week-long Bitcoin conference in El Salvador. His appearance was heralded by some high-budget production and fireworks.

They definitely didn’t skimp on the production budget for Bukele’s entrance — Metaverse avatar and all pic.twitter.com/VwspEggmLe

Bukele told the assembled crowd that Bitcoin City will rely on geothermal energy from nearby volcanoes, and it will be tax-free except for value-added tax (VAT). Said Bukele: “Invest here and make all the money you want. This is a fully ecological city that works and is energized by a volcano.”

Details of exactly what Bukele’s “Bitcoin city” entails are thin, but the leader hopes to attract foreign Bitcoin investment into the city. He said: “If you want bitcoin to spread over the world, we should build some Alexandrias.”

Bukele briefly sketched a vision of the topography of the city and said that it will be circular, and will contain an airport and residential and commercial districts. He also said the central plaza will look like the Bitcoin symbol from above.

In order to issue the bonds, El Salvador has struck deals with Blockstream and iFinex. iFinex will be the government’s bookrunner, helping it to write new digital tokenized securities laws. The government will then give iFinex the first license in this new regulatory framework so that it can issue Bitcoin-backed billion-dollar bonds on Bitfinex securities.

Samson Mow, CSO of Blockstream, also appeared at the event and confirmed that the bonds will be issued on Blockstream’s Liquid Network.

El Salvador made Bitcoin legal tender on September 7 this year, though the move faced stiff criticism from the political opposition, and heavy skepticism from most residents. Ethereum founder Vitalik Buterin said El Salvador’s Bitcoin adoption was “contrary to the ideals” of crypto.

In a blog post, Buterin elaborated: “This tactic of pushing BTC to millions of people in El Salvador at the same time with almost no attempt at prior education is reckless, and risks a large number of innocent people getting hacked or scammed. Shame on Bitcoin maximalists.”

But it hasn’t all been criticism though. Bukele’s overt Bitcoin maximalism has earned him respect among fellow maxis, like MicroStrategy CEO Michael Saylor and crypto podcaster Peter McCormack.

Welcome to #Bitcoin @nayibbukele. No force on earth can stop an idea whose time has come. https://t.co/EWHqnEZWbQ

Still, in spite of criticism from all corners, Bukele has blazed ahead with his Bitcoin adoption plans. On October 1, Bukele tweeted that El Salvador had started to mine Bitcoin with geothermal energy.

Last month, El Salvador reported that its Bitcoin trust had a surplus of $4 million due to the currency’s rising prices. Bukele announced he would use the cash to build a pet hospital.

Bitcoin wallet Strike has been one of the partners of El Salvador’s Bitcoin adoption process, and on October 14, El Salvadorans noticed a new “Pay Me in Bitcoin” feature that converts direct bank deposits into Bitcoin.

At the end of last month, Bukele took advantage of a dip in Bitcoin prices to add 420 more Bitcoins to the country’s treasury, taking El Salvador’s total Bitcoin holdings to 1,120 BTC.