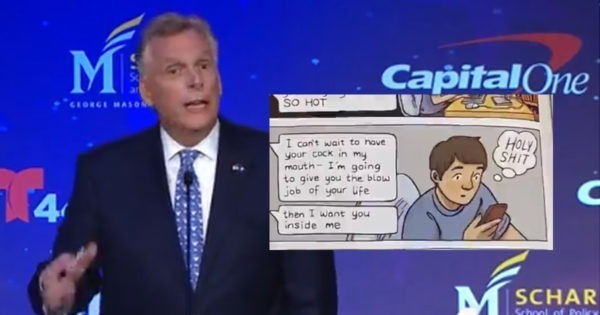 Terry McAuliffe’s Soviet-style remarks on education came during this week’s gubernatorial debate, where he faced off against GOP nominee Glenn Youngkin, who made parental rights pertaining to education a key piece of his debate argument.

Youngkin drilled down on an ongoing controversy in Fairfax County, where parents are fuming over a public school allowing gay, pornographic material to be stocked in the school’s library. According to a mother who attempted to address the issue with the far-left county school board – only to be silenced – the school library carried multiple books that included illustrations depicting gay sex acts, including gay sex acts between a grown man and a fourth grade boy.

HOW THE HELL IS THIS BEING ALLOWED IN SCHOOLS?

Everyone involved in the producing , distributing and administering of these materials needs to be ARRESTED!!

“You believe school systems should tell children what to do. I believe parents should be in charge of their kids’ education,” Youngkin told McAuliffe, who responded with a promise that as Governor, he will keep parents as far away from their kids’ schools as possible, saying that parents have no right to “make their own decisions” regarding their own children.

“I’m not gonna let parents come into schools and actually take books out and make their own decisions,” McAuliffe said, going on to boast that during his previous term as Governor, he actually vetoed a bill that would have allowed for greater parental involvement in the education of children, and would have even given parents “veto” power over education material they found objectionable.

“Yeah, I stopped the bill,” McAuliffe said. “I don’t think parents should be telling schools what they should teach.”

Terry McAuliffe: "I don't think parents should be telling schools what they should teach." pic.twitter.com/7S15pTv1gY

The Youngkin campaign has quickly seized upon McAuliffe’s anti-parent sentiment, releasing a new ad exposing Terry McAuliffe’s education plan in his own words.

Are you a parent who wants to have a say in your child's education?

Too bad. Terry McAuliffe says you have to sit down and shut up. pic.twitter.com/YOja0FWxVJ