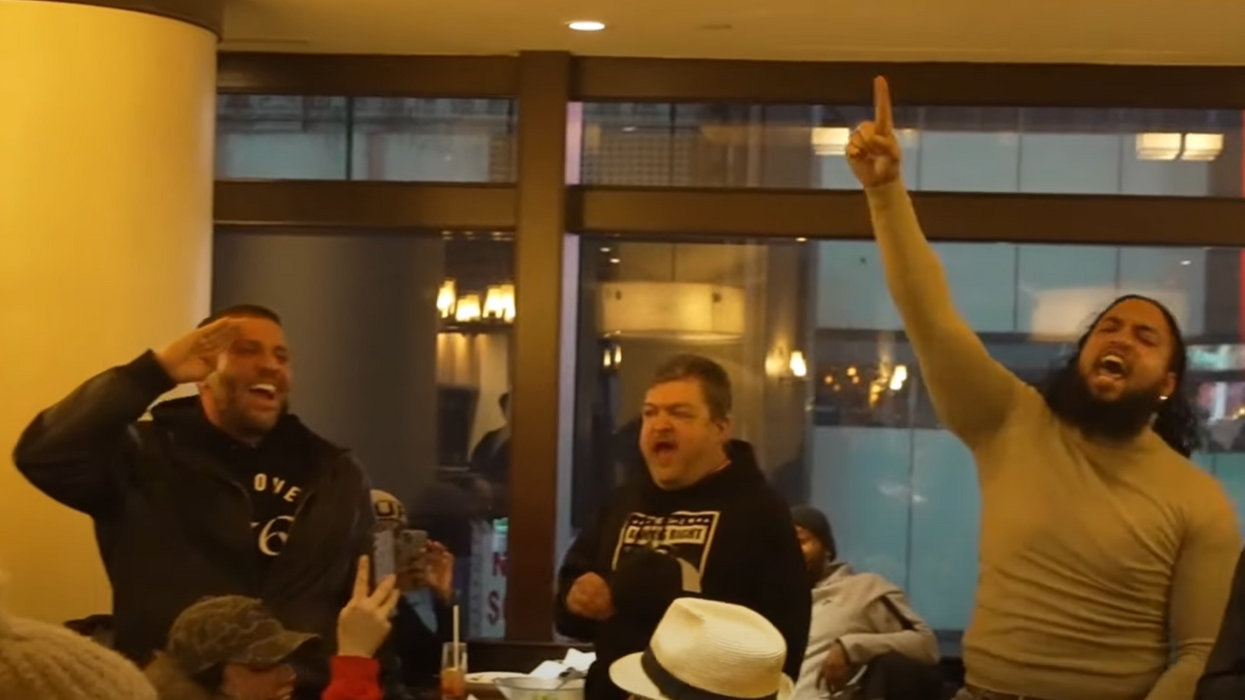 A group of New Yorkers launched a protest at the Olive Garden to show their disdain for the city’s vaccine mandate that requires people ages 5 to 12 to show proof they have received at least one dose of a COVID-19 vaccine, and people 12 and older to show proof of two doses of the coronavirus vaccine.

Video shows the protesters — who refused to provide the restaurant with verification that they had received the COVID-19 vaccine — gathered in the Olive Garden restaurant.

“Victorious, we shut them down,” a demonstrator boasts as employees of the restaurant refuse to serve the unmasked protesters.

“Take off your mask, free your face,” another protester tells employees of the restaurant. “Stand up to your bosses.”

The protesters chanted “U-S-A!” and sang “The Star-Spangled Banner.”

Oliya Scootercaster of Freedom News TV reported that the restaurant closed after the protesters were there for two hours. The protest was over by 10:40 p.m., but the restaurant allegedly shut down before its usual Friday closing time of 1 a.m.

“Victorious, we shut them down” – anti-mandate protesters occupied the Olive Garden in Times Square for 2 hours. \nAfter two hours, instead of being arrested, the business decided to stop operation for the night and closed.pic.twitter.com/SxH2uSkxbV

New York Police Department officers were summoned to the restaurant, and most of the demonstrators dispersed.

Video from independent photojournalist Leeroy Johnson shows protesters being escorted out in handcuffs by NYPD officers.

“I got arrested. They arrested me for trying to eat at Olive Garden, that’s what happened,” a protester said.

While being taken away by police, a protester shouts, “This is the Civil Rights movement again!”

Another demonstrator screamed, “Wake up New York! Wake the f*** up!”

Some onlookers applauded the protesters and called them “heroes.”

#Breakingnew \nMultiple protesters against mandates were just arrested at Olive Garden in NYC that’s for the vaxxed only , Activists attempt to order food and were refused service. The #NYPD was called and told them to leave or they will be arrested. \n#VaccinePassports #Fridaypic.twitter.com/GAeNZGXCZp

Four protesters were arrested after refusing to leave the restaurant, according to the New York Post. “Three men and a woman were expected to be charged with trespassing, according to officials,” the outlet reported. There were no reports of vandalism, according to Fox News.

There have been similar anti-vaccine passport protests at restaurants in New York City, including at Carmine’s in the Upper West Side, Cheesecake Factory in Queens, and a Burger King in Brooklyn.