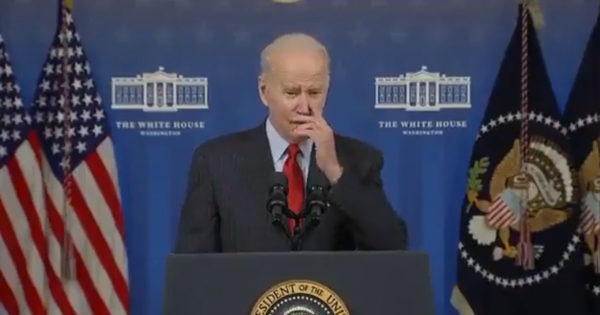 Democrat President Joe Biden engaged in another one of his trademark verbal blunders during a speech about the skyrocketing gas prices under his administration, reading “end of quote” of of his teleprompter at the end of sentences.

“A lot of innovation, because of the actions we’ve taken things have begun to change, end of quote,” Biden said before launching into the next sentence.

NEW – Biden reads from the teleprompter incl. an "end of quote" notice.pic.twitter.com/DhNwl2pwzc

The President also went on to try to blame high U.S, oil prices on other countries and companies: “A big part of the Am- of the reason why Americans are facing high gas prices is because oil-producing countries and large companies have not ramped up the supply of oil quickly enough to meet the demand. And the smaller supply means higher prices globally, globally for oil.”

Biden blames high gas prices on "oil-producing countries and large companies" because they are not ramping up production "quickly enough" pic.twitter.com/ibD5iPU4sQ

In another recent public speaking gaffe, Biden called a black baseball player a “negro,” which is widely considered by Democrats to be an offensive slur:

Democrat president of the United States Joe Biden raised eyebrows during a speech on Wednesday by referring to a black baseball player from the 1940s as “the great negro at the time, pitcher in the Negro leagues.” Biden did not appear to show any comprehension of the fact that the term negro is considered a malicious slur by the people who run his political party.

“I’ve adopted the attitude of the great negro at the time, pitcher in the negro leagues, went on to become a great pitcher in the pros, in the MLB after Jackie Robinson, his name was Satchel Paige,” Biden declared without skipping a beat.