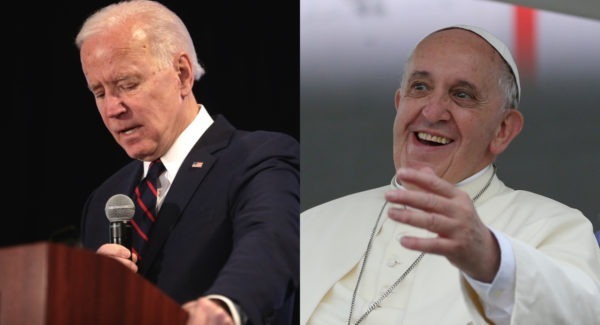 The Vatican decided to cancel coverage of the meeting between Joe Biden and Pope Francis at the last minute on the heels of Francis’s meeting with House Speaker Nancy Pelosi.

The Vatican bizarrely cancelled coverage of a planned meeting between Pope Francis and Joe Biden that is set to occur on Friday, according to reports. Instead, only Biden’s arrival via motorcade will receive press coverage, and the meeting between the religious and world leaders will not be made public.

The move raises questions, given that in the past, the Vatican has frequently broadcasted meetings between the Pope and various world leaders.

Biden has met with Pope Francis on three separate occasions, though not while serving as President of the United States. Biden’s Friday visit comes after abortion-loving Democrat House Speaker Nancy Pelosi and her husband paid a visit to the Vatican to meet with the Pope earlier this month amid secrecy, as National File reported:

From the report: “Pope Francis met with House Speaker Nancy Pelosi (D-Calif.) on Saturday. At the time of publication, the Vatican had released no information about what the pope and Pelosi discussed, in line with its usual custom for papal meetings with non-heads of state.”

According to an October 9 daily bulletin, the Vatican added that she was accompanied by her husband Paul Pelosi, a member of the elusive elite club Bohemian Grove.

The Pope has long been criticized for his support for what many describe as globalist, anti-Christian issues, and has even been described as a “zealous cooperator” in the globalist Great Reset agenda, presiding over the “demolition” of the Catholic Church in order to replace it with an order based on “Masonic inspiration,” according to Archbishop Carlo Maria Vigano.

“A global plan called the Great Reset is underway. Its architect is a global élite that wants to subdue all of humanity, imposing coercive measures with which to drastically limit individual freedoms and those of entire populations,” Archishop Vigano wrote to President Donald Trump in October 2020.

“In several nations this plan has already been approved and financed; in others it is still in an early stage. Behind the world leaders who are the accomplices and executors of this infernal project, there are unscrupulous characters who finance the World Economic Forum and Event 201, promoting their agenda.”