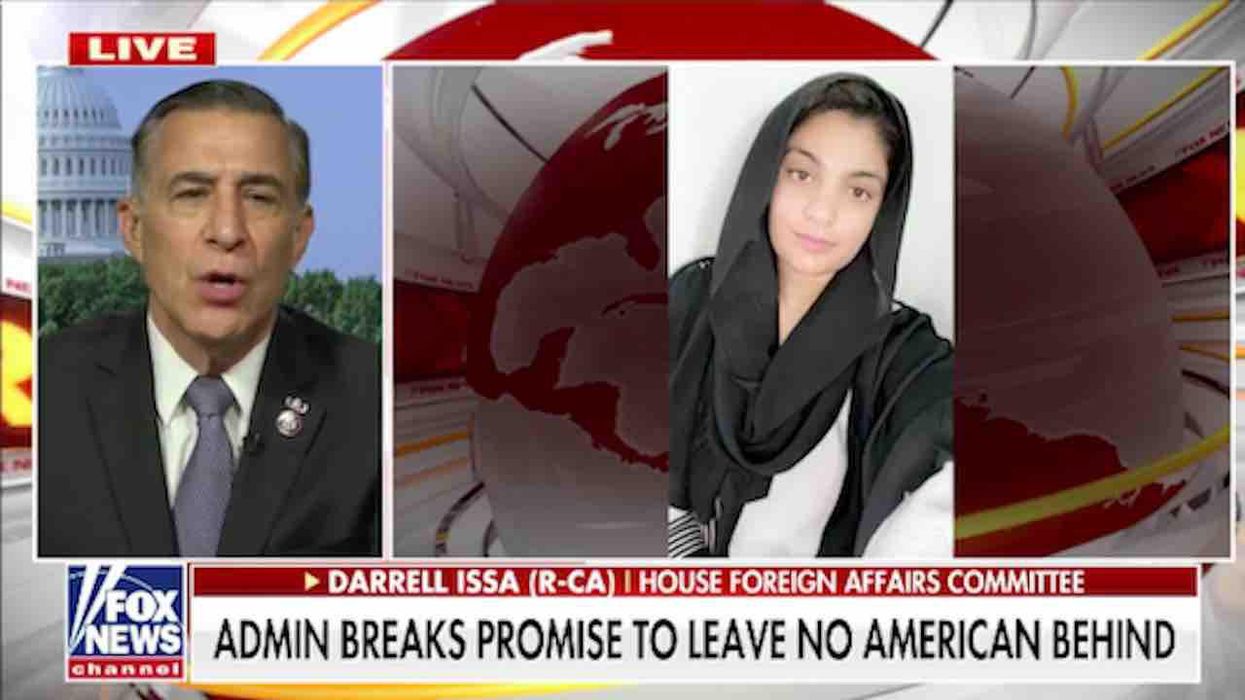 Taliban militants kicked a pregnant American in the stomach as she tried to evacuate Kabul, Afghanistan, with her husband and father — and she’s still trapped there and in hiding, Fox News reported.

‘Kicked in the stomach’

Fox News’ Ainsley Earhardt on Tuesday spoke to Republican U.S. Rep. Darrell Issa of California about the pregnant woman he called “Nasria,” who never made it aboard an aircraft and out of danger.

“She was kicked in the stomach, but she was kicked in the stomach well after — as she got through the first checkpoint where she remained for hours, waiting for those people at the south point to supposedly come out and get her,” Issa told the cable network. “It wasn’t until it was clear they’d closed, [that] they weren’t taking anyone else for quite a while, that finally she accepted that she was going to have to go back and hide in her apartment.”

The congressman also told Fox News that “Nasria” made “multiple trips” to the airport before U.S. forces departed.

Issa added to Earhardt that about three hours prior to their interview his team had been attempting to arrange a “possible alternative” way out of the country but that a “third party” would be involved and that it was nixed for being “too dangerous.”

“We’ve agreed that she’s going to stay sheltered in place, hiding her identity and hoping that her friends will continue to bring her food and keep her secret until frankly we can come up with something new,” he also told Fox News, adding that “we know her exact location but literally are afraid to even have a conversation about a rendezvous until we know where and when somebody could meet her.”

Earhardt asked Issa if that fear was due to others possibly listening to phone calls, and he replied affirmatively.

“The Russians have already come in, as have the Chinese. Once you control a phone system — the ability to find out where every cell is and who owns it — they have that data now,” the congressman told Fox News. “So anyone who wants to remain unknown has to switch phones, turn them off, use all the techniques that you would use if you were in survival, escape, and evasion.”

He added that while the Taliban’s intentions aren’t known, it helps to remember that “the president made an agreement and kept an agreement with a terrorist group that was responsible for harboring those who [attacked] us on 9/11, and then didn’t keep his promise to the American people.”

Issa also offered the grim reality that after U.S. diplomats moved to Qatar, “there’s no longer any diplomatic mission in Kabul. So the idea that either military or diplomatic is going to work is hoping that a terrorist group — still with relations with other terrorist groups — somehow is going to help us get Americans out.”

‘These people were stranded’

The congressman also declared that “anyone” who says U.S. leaders “didn’t break a promise to the American people and [left] people behind is wrong. Anyone who says that there aren’t people stranded is wrong. These people were stranded; they did everything they were supposed to do, and they simply were not a priority at the end.”

Ep. 1607 Is Hillary In Serious Trouble? Or Is This Another Headfake? - The Dan Bongino Show®
YouTube Video VVVKdUhLU2FEMG83bVg2alNidmlzbnZnLlBBeElpazV0ZUFN