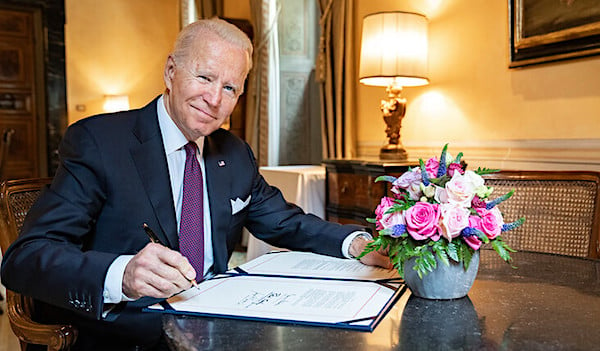 President Biden is funding the Palestinian Authority’s “pay-for-slay” program, its funding for terrorists, or their families, when they kill innocent people and are caught or killed, by a back door that circumvents federal law, a new report charges.

The report by Maurice Hirsch at the Palestinian Media Watch explains, “While the U.S. administration is prevented from providing direct aid to the PA, according to PA Minister of Finance Shukri Bishar’s adviser Stephan Salameh, for 2022 the U.S. has promised at least $225 million worth of financial aid to the Palestinians.”

Direct aid is prohibited by the Taylor Force Act.

Force was a West Point graduate and veteran of tours in Iraq and Afghanistan, and was murdered by a Palestinian terrorist while walking along the promenade in Tel Aviv.

The terrorist was killed at the scene, before he could murder other innocent people, the report said.

“To this day, the Palestinian Authority pays a monthly allowance for life to the family of Taylor’s murderer, simply because the terrorist was killed during his murderous terror attack,” the report said.

Millions of dollars more, every month, are paid by the PA to “terrorist prisoners, released terrorists, wounded terrorists, and the families of dead terrorists.”

Congress adopted the Taylor Force Act in 2018 banning Economic Support Fund help, the largest section of U.S. funding to the PA. The law conditioned ESF help on the end of that.

But the PA has continued spending hundreds of millions of dollars on “terror rewards,” including more than $32,000 to the family of the killer of Force.

The report said, however, since the U.S. can’t provide direct aid to the PA, Salameh confirmed the U.S. still has promised $225 million in help.

Salameh explained the money will be “allocated to development projects.”

But the report said that openly violates the spirit of the law because the PA is the recipient of the money, and “development projects” is just a euphemism “for projects that the PA needs to fund from its own budget, but will now be funded by the U.S. administration, thereby freeing up the PA’s own funds to continue rewarding terrorists.”

“The U.S. administration’s looking for loopholes in order to bypass the TFA desecrates Taylor’s memory,” the report added.