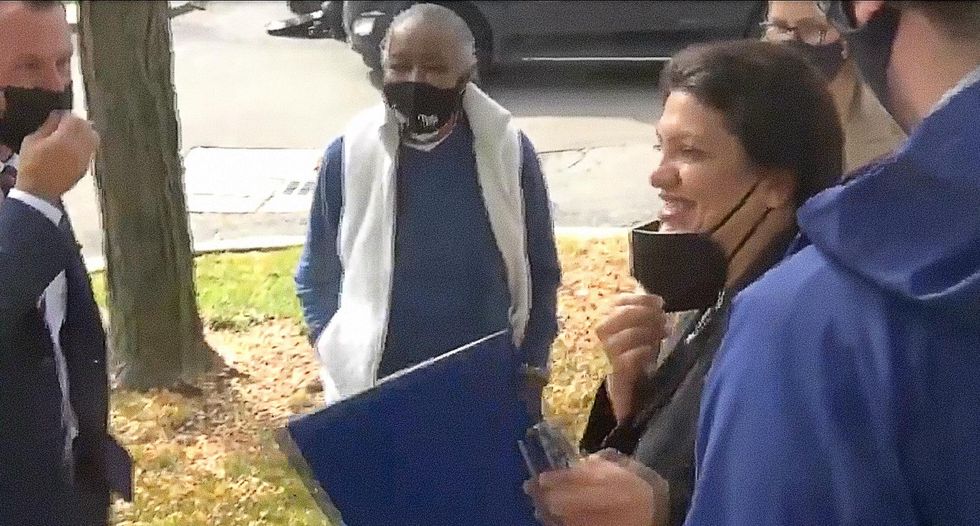 Rep. Rashida Tlaib (D-Mich.) was caught on camera saying that she’s only masking up because she was being tailed by what she referred to as a “Republican tracker,” The Washington Free Beacon reports.

Tlaib made the bizarre-sounding admission while talking with an attendee at a Detroit community event with Housing and Urban Development Secretary Marcia Fudge.

After the event, Tlaib was talking with a group of people when a maskless attendee approached her and mistakenly thought that Tlaib was scolding him for being “the one unmasked guy” in the surrounding area.

She then pulled down her mask and smiled at the attendee and went on to insist, “No, no, no; I’m just wearing it because I’ve got a Republican tracker here.”

This isn’t the first time Tlaib has been in the spotlight for masking snafus.

In August, she was captured dancing while maskless during an extremely crowded, indoor wedding reception in Dearborn, Michigan, despite skyrocketing COVID-19 case counts triggered by the highly contagious Delta variant.

The Washington Free Beacon reported that Tlaib’s office did not return a request for comment on the video.

Caught on Video: @RashidaTlaib Admits She Only Wears Mask for Cameras “I’m just wearing it because I’ve got a Repu… https://t.co/Lr4UboMHyW

Many social media users took to Twitter to express their feelings on what they believed was Tlaib’s hypocritical statement.

Writer David Marcus wrote, “Huh. Guess my kid must have a Republican tracker at school, too.”

Huh. Guess my kid must have a Republican tracker at school, too. https://t.co/1h9qvrsSXq

CONFIRMED: Masks are a political theatre acted out by leftists. #ampFW https://t.co/vXEj3pj14X

Economist Alan Cole wrote, “This is the inevitable product of the ‘shame people for not following the dumb rules’ culture we’ve invented. If we just admit that outdoor masking is dumb, this can all go away! It’s all a prison of our own making!”

This is the inevitable product of the “shame people for not following the dumb rules” culture we’ve invented. If w… https://t.co/GtxkjhxLvM

So this mean @RepRashida believes the mask are ineffective? https://t.co/oVWEXJpIYP