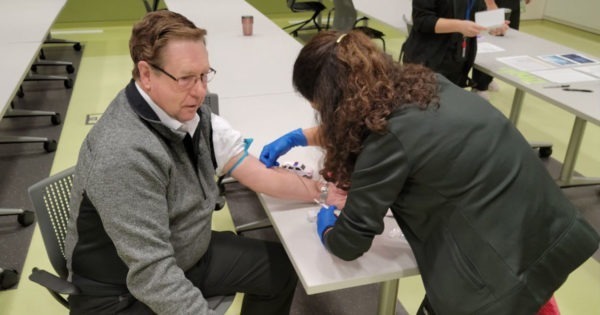 As the Kansas legislature moves further toward enshrining the right to refuse the controversial COVID-19 vaccines into law, Johnson County Sheriff Calvin Hayden has made a revolutionary immune system test available to his employees with the goal of allowing them to make an “informed decision” about their health.

Johnson County Sheriff Calvin Hayden is allowing all employees of his department to use “an immune system monitoring technology which provides a personalized comprehensive profile of the immune system” developed by a company called Aditxt.

According to a release from Hayden’s office, the AditxtScore test is “the only known antibody test that will test to the T-cell level and provide an accurate reading of an individual’s Covid-19 immunity.”

Hayden explained that “This testing allows our employees to make an informed decision on what to do about their own health,” and said that he is “happy to offer this resource to anyone who wants to take advantage of it at the Sheriff’s Office. So far, the response has been overwhelmingly positive.”

Johnson County, Kansas is the most populous county in Kansas and encompasses much of the Kansas City Metropolitan Area that falls within the borders of Kansas. The Johnson County Sheriff’s Office employs 450 law enforcement personnel, and 150 civilian support staff.

Last month, as Joe Biden’s nebulous vaccine mandate loomed in the distance, Hayden said he would not require his officers to consent to receiving one of the controversial vaccines.

“The Johnson County Sheriff’s Office is a safe haven for law enforcement officers who feel unsupported and undervalued by their communities and their government leaders,” Hayden said in a press release, as reported by local media. “People may say this is all about the vaccine, but that’s missing the point. This issue is so much more than that. This is about valuing, empowering and supporting individual decisions.

Later in the press release, Hayden made “an appeal to police officers potentially looking for a new department” according to local media, leading journalists to speculate that Hayden’s refusal to discriminate against those who do not consent to the COVID-19 vaccines could bring new talent to the Johnson County Sheriff’s Office.

“With employees from all over the globe, from Scotland to California. Additionally, at least 16 languages are currently spoken by employees of the Sheriff’s Office. Equal opportunity is provided to all,” Hayden said.