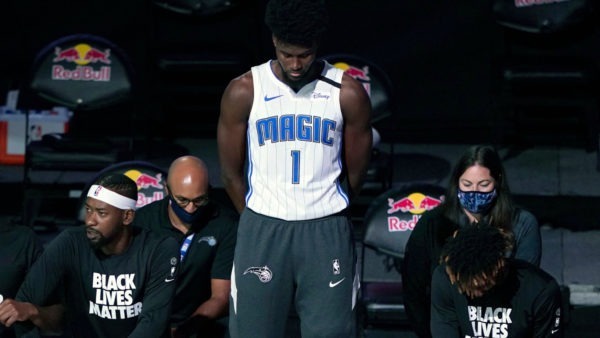 Jonathan Isaac of the Orlando Magic expertly laid out why he has opted not to get vaccinated at a press conference on Monday. The 23-year-old forward also blasted a Rolling Stone article that he says was a massive misrepresentation of his beliefs.

The article in question referred to Isaac and other vaccine-skeptical NBA players as “anti-vaxxers” and accused them of pushing “conspiracy theories” in order to strong-arm the league. “The Orlando Magic’s 23-year-old starting forward is deeply religious — and proudly unvaccinated,” reads the article.

Isaac ultimately had harsh words for the Rolling Stone piece at the press conference on Monday.  I can understand anyone who may say they don’t transparently or overtly trust the media. In a frustrated tweet yesterday, I had noted that true journalism was dying,” Isaac said. He then addressed the reasons why he has yet to get vaccinated against COVID-19.

Orlando Magic’s Jonathan Isaac says he isn’t getting the covid vaccine because he has natural immunity and data shows he isn’t at risk at all from covid. Well said: pic.twitter.com/AJmvlNRyff

The NBA player cited the fact that he has had COVID before and touted natural immunity. “I understand that the vaccine would help if you catch Covid, you’ll be able to have less symptoms from contracting it. But with me having Covid in the past, having antibodies, with my current age group and physical fitness level, it is not necessarily a fear of mine,” said Isaac.

“You can still catch Covid with or without having the vaccine. I would say honestly, the craziness of it all, in terms of not being able to say that it is everybody’s fair choice without being demeaned or talked crazy to,” he added.

Magic’s Jonathan Isaac chooses to remain standing as the rest of the Magic and Nets players and coaches take a knee and lock arms during the national anthem.

Jonathan Isaac has long drawn the ire of NBA fans and especially journalists, both demographics that lean heavily left. Last summer, Isaac made headlines when he was the only player to stand for the national anthem amidst a heavily politicized NBA return. The rest of both his and the opposing team, all wearing “BLACK LIVES MATTER” shirts, knelt for the anthem. “For me Black lives are supported through the gospel. All lives are supported through the gospel. We all have things that we do wrong and sometimes it gets to a place that we’re pointing fingers at who’s wrong is worst,” he said at the time.