Moldova To Avert Energy Crisis With Payment To​​​​​​​ Gazprom

Update (1545ET): Well, that was quick. As colder weather sweeps across Europe and Russia’s Gazprom was hours away from halting natural gas flows to Moldova over non-payment, Moldova’s parliament appears to have come up with the money.

Moldova’s parliament will vote on Thursday to amend the state budget to transfer 1.4 billion Moldovan leu ($78.98 million) to pay its outstanding gas bill with Gazprom for October and pay an advance for November, Deputy Prime Minister Andrei Spinu said.

Spinu said his government “will do everything needed” to prevent Gazprom from shutting off flows which would trigger an energy crisis.

“We considered it’s more transparent to have the budget revision approved through parliament and respect all the rules. We asked the parliament to vote as soon as possible and, as far as I know, they will vote on the proposal on Thursday,” he added.

It appears Moldova will keep its light on, and homes will be heated upon payment. The country is one of the poorest in Europe and struggles to pay its gas bills amid the energy that grips the continent.

European natural gas prices could surge as new reports indicate Gazprom will halt all natural gas flows to Moldova, an Eastern European country, in 48 hours over non-payment for its gas consumption. The news follows Germany’s energy regulator, which suspended the approval process for the Nord Stream 2 pipeline last week. Russian President Vladimir Putin continues to exert pressure on Europe with declining gas flows amid the onset of the Northern Hemisphere winter.

The crux of the issue is that Moldova has yet to pay its energy bill to Gazprom. “Today is the scheduled date of payment. Yet, there is no payment,” Sergey Kupriyanov, Gazprom board chairman’s spokesman, said in a statement, according to RT News. He said the company is “extremely disappointed” in Moldova’s failure to fulfill its obligations on its recently extended energy contract. 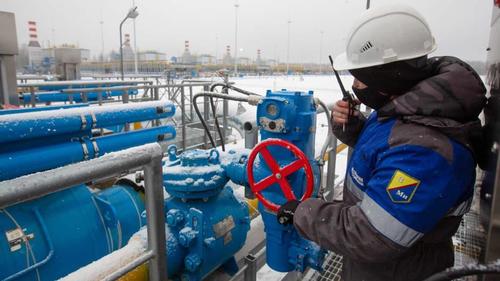 Gazprom was expecting payment for Moldova’s gas usage on Monday (Nov. 22). This comes after Chisinau, the capital of Moldova, struck a 5-year deal with the gas producer on Nov. 1.

Kupriyanov said Gazprom attempted to set “market gas price” for Moldova but had to then take into account the “difficult economic and financial situation” in the country and Putin’s position. In the deal, he said most of Chisinau’s terms were reached, including a special discounted price.

Moldova was only to pay for its current consumption, the spokesman said, adding that Chisinau is in breach of contract, forcing Gazprom to suspend gas flows. The contract extension comes as Chisinau has mounting unpaid gas bills with Gazprom.

According to RT, before the Nov. 1 deal was signed, “Chisinau was close to introducing a state of emergency in case of failed talks. The tense situation also sparked some allegations that Moscow sought to exert pressure on Chisinau to break up its deal with the EU. Gazprom repeatedly denied such claims, arguing that it simply can’t afford to make a loss on the deal.”

Moldova not paying its bills comes as Germany’s energy regulator unexpectedly suspended a crucial step in the approval process for the Nord Stream 2 pipeline last week. Dutch month-ahead gas, the European benchmark, soared last week on the news as that Nord Stream 2 pipeline might not get approved by the expected January timeframe but more likely after the cold season.

The scarcity of gas in Europe continues to place a bid under prices as it deals with some of the lowest gas storage levels since 2013, ahead of what could be a nasty winter. As much as European officials oppose Russian gas, the continent desperately needs Gazprom to survive this winter. As for Moldova, if gas is shut off in the next 48 hours, the country might declare a state of emergency.