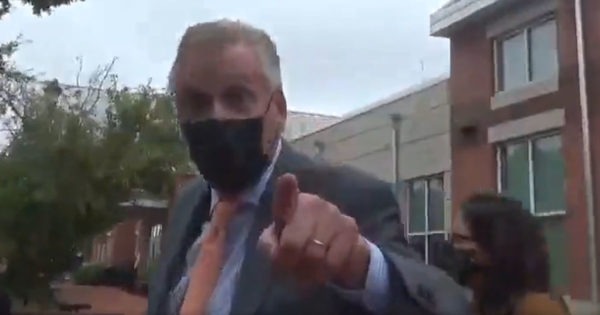 Video footage from Virginia shows Democrat gubernatorial nominee Terry McAuliffe having an emotional episode after being being confronted by a member of Virginia Rising Action on Wednesday, shouting “Have you been vaccinated,” “You should have a mask on,” and “You’re dangerous here.”

During a recent debate against Republican opponent Glenn Youngkin, McAuliffe trashed parents by stating, “I’m not going to let parents come into schools and actually take books out and make their own decision,” and “I don’t think parents should be telling schools what they should teach.”

Conservative watchdog group Virginia Rising confronted McAuliffe over these remarks while the latter leaving an education roundtable discussion in Alexandria, drawing a heated emotional reaction from the Democrat Party nominee.

WATCH: Terry McAuliffe loses his temper on a Virginia Rising tracker saying “you’re dangerous here” after getting asked about his stance on parents being involved in their child’s education.https://t.co/Tzj2XDbiS4 pic.twitter.com/Hm674TGAkT

“Who do you think should be in control of education if not Virginia parents,” McAuliffe was asked, to which he thrust an index finger into the camera and shouted, “Have you been vaccinated yet, that’s the question I wanna know. You should have a mask on … you’re dangerous here.”

“I’ll build education,” The former governor shouted while hurriedly climbing into a waiting SUV. “That’s why Fox News has me leading. Glenn Youngkin destroyed Virginia’s education system,” he continued, before saying “Alright, let’s get at it buddy” at the vehicle’s driver.

Poll numbers show McAuliffe holding a slight lead over Youngkin, due what many experts agree is reticence from the Republican base to support a candidate who blamed rising crime rates on white supremacist “hatred” during a campaign ad:

“It was hatred that killed my father and eight others in a church Bible study,” Ms. Simmons tells viewers as the Youngkin for Governor ad begins. “That type of evil is driving the rising crime here, in Virginia.”

“Right now, all of our communities are at a crossroads,” Simmons continues. “That’s why we need Glenn Youngkin. I know Glenn, he is a compassionate leader who knows how to unify Virginians and create the change we need to protect our communities. We need a new direction and a new Governor. For me, that’s Glenn Youngkin.”