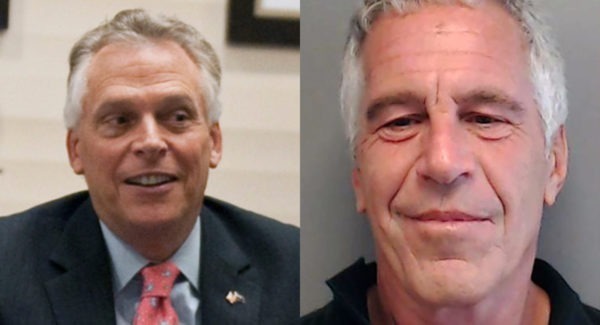 Terry McAuliffe, the Democrat candidate for Virginia governor who formerly held the job prior to Ralph Northam, received $100,000 for his campaign in September from Ron Burkle, a billionaire associate of the late pedophile Jeffrey Epstein who owns a plane called the “F*** Jet.”

As was reported by Fox News:

Ron Burkle, a billionaire investor, donated $100,000 to McAuliffe’s campaign in September — his latest donation in support of the former governor’s electoral bid, according to Virginia campaign financial records reviewed by Fox News.

Burkle, who made his billions in the supermarket game and rose to prominence after former President Clinton joined his financial firm Yucaipa, previously gave McAuliffe another $100,000 at the end of last year as the Virginia gubernatorial contest ramped up.

According to the report, this would not be the first time that the Epstein associate and owner of the “F*** Jet” had donated to McAuliffe. Between the years of 2013 up until 2021, Burkle’s political action committee (PAC) called Common Good VA gave just short of a half a million dollars to the Virginia Democrat.

Burkle is a reported associate of both Epstein and former President Bill Clinton, and was named in the Epstein’s infamous “black book” as well as his private jet travel log.

Burkle’s “F*** Jet,” a Boeing 757, “has taken both Burkle and Clinton around the world,” according to reports. The billionaire once said he was “very shy with girls” and that it “takes me about a year to tell a girl I like her” after reports surfaced about women coming on to his jet.

Speaking on the activity of former President Clinton while on the “F*** Jet,” Burkle said “No woman could get within 100 miles of [Clinton] while I was on watch.”

Jeffrey Epstein’s airplane was famously named the “Lolita Express” in an apparent nod to the dead sex offender’s interest in teenage girls.