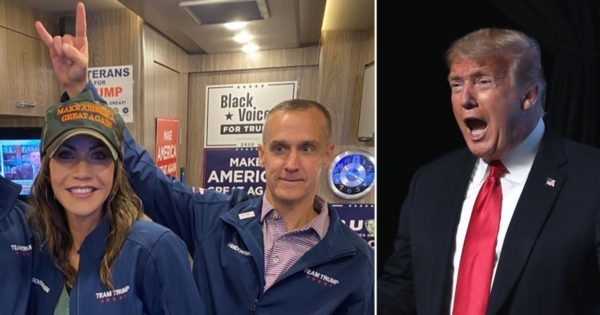 South Dakota Gov. Kristi Noem is reported to be having an extramarital affair with former Trump campaign advisor Corey Lewandowski, according to a bombshell report by American Greatness.

American Greatness says multiple sources all told the outlet the same thing: “Noem is having an extramarital affair with adviser Corey Lewandowski, who previously served as a campaign manager” for President Trump during his 2016 run for the White House. The publication adds, “Lewandowski, who is married with four children, still has the former president’ ear, which he reportedly uses to Noem’s advantage.”

This is the first time the affair, of which National File first heard rumors around a month ago, has been exposed to the public. As a source told American Greatness, “There are members of Congress close to Mar-a-Lago who have called the affair ‘an open secret’” and expressed concerns about Noem’s “viability as a national candidate and within the movement” if Lewandowski or others were to successfully push for her to be named as President Trump’s 2024 running mate.

Noem appeared to direct reference the rumors in a tweet posted on Wednesday which read, “These rumors are total garbage and a disgusting lie. These old, tired attacks on conservative women are based on a falsehood that we can’t achieve anything without a man’s help. I love Bryon. I’m proud of the God-fearing family we’ve raised together. Now I’m getting back to work.”

These rumors are total garbage and a disgusting lie. These old, tired attacks on conservative women are based on a falsehood that we can't achieve anything without a man's help.

I love Bryon. I'm proud of the God-fearing family we've raised together. Now I'm getting back to work

The embattled South Dakota governor has drawn the ire of conservative voters for various scandals, including telling constituents to quit their jobs and look elsewhere if their employer imposed corporate vaccine mandates and claiming “Since when did the Republican Party become the party of big government and social engineering using government power to force behavior?”

Most notably, Noem vetoed legislation that would prevent biological males from competing in women’s sports, all the while claiming that her action was justified because she didn’t technically consider it a veto. Viewers were unconvinced by Noem’s position when she defended it on the high-profile Tucker Carlson Tonight television program earlier this year.

Noem has consistently linked all negative criticism of herself from the right wing to purported sexism and misogyny, referencing a supposed bias against powerful conservative women in Republican circles.