Is Gunvor Getting Flushed? How NatGas ‘Netbacks’ Are Crushing The Secretive Commodity Trader

Earlier this week, we noted that some of the world’s largest commodity traders were facing massive margin calls from wrong-way spread trades in the natural gas markets.

According to reports, it appears the trading shops have all been hammered by a spread (or arbitrage trade) gone wrong.

For years, the prices of European (red) and US natural gas (green) have traded within a well-defined range. When the spread between the two reaches one extreme or the other, you buy one and sell the other – easy, right ? 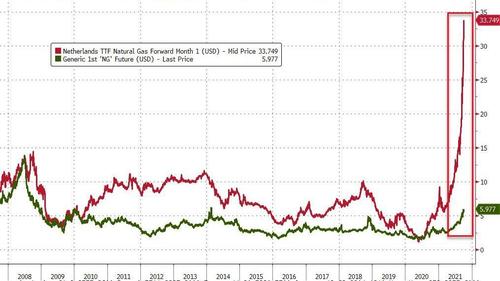 So as European NatGas prices surged in Q2, it reached a notable extreme relative to US NatGas, prompting traders to instigate the strategy of selling European Gas and Buying US Gas in the hopes the spread compresses.

The strategy backfired last month when European gas prices soared due to a variety of factors including low inventories, high demand for gas in Asia, low Russian and LNG supply to Europe, and outages.

Since then, the situation appears to have grown more grim, as Bloomberg reports that major energy traders including Gunvor Group. and Mercuria Energy Group. have reduced the size of their trading positions and increased borrowing from lenders to cover large margin calls stemming from the unprecedented surge in European gas prices, according to people familiar with the matter.

Specifically, Bloomberg reports that both Gunvor, the biggest independent trader of liquefied natural gas, and Mercuria, a major power and gas trader, asked banks for additional credit to fund margin calls arising from their hedging positions, said the people, who asked not to be named because the information is private. 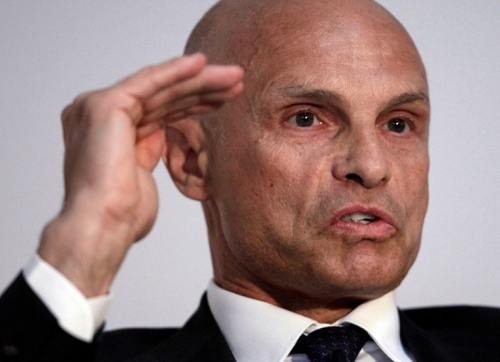 But, as ‘Structurer’, Jacques Simon, details in the following report, the situation could be far more grave for Gunvor…

Gunvor is very secretive on their financial positions, only releasing partial and selective information.

The trader turnover is 94 million mt/year and the rule of thumb is that each 1$ in sale is backed by 5$ of debt. With the turnover growth we believe Gunvor debt is minimum $20B. 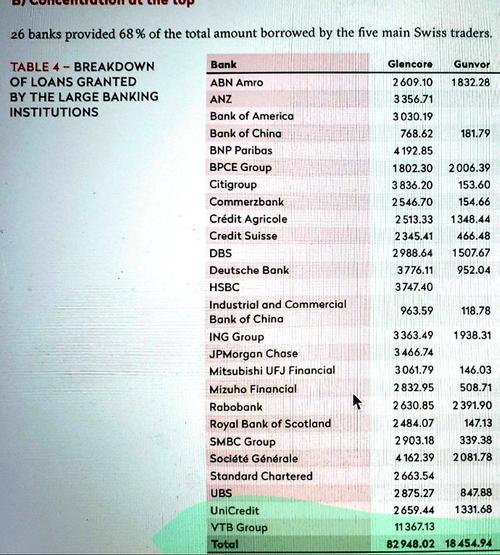 Netbacks are based on the premise that the spread between two global LNG markets are underpinned by the transportation costs.

The arbitrage flows is from the low price market towards the higher price market putting a downward pressure on the overpriced market, and has the effect of reimposing a netback-based parity between the markets. Netbacks assume an access to financing, prompt cargoes in the cheap market, and shipping capacity.

IF NETBACK TTF >= NETBACK JKM, the trader will ship the LNG to TTF until the equation parity is restored again.

The caveat: It is another mean-reversion trade based on moderate volatility. 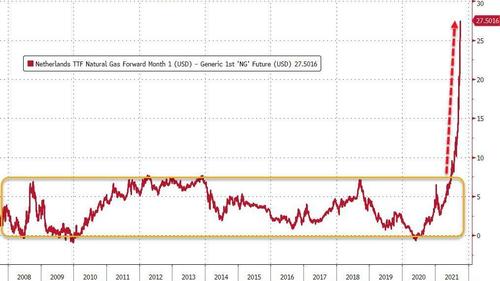 Typically when the spread goes over the pre-hedge level, the freight cost rises => and Gunvor (long) absorbs the risk because it leases a 10-year fleet. In this situation Gunvor still makes a profit despite a $2-3 margin call on the hedge because it can resell the physical cargo or resell the freight voyage (relet).

However this is not the behavior observed during Q3 and in Q4-21… As the TTF-HH goes above the 90th percentile value (blue line) while the freight (purple) has not converged with the arbitrage.

Gunvor has not captured the arbitrage with the freight.

What a trader employee at Gunvor did was underwriting a gigantic amount of risk (CALLs like optionssellers.com…) analogous to multiple times the trading-firm capital. 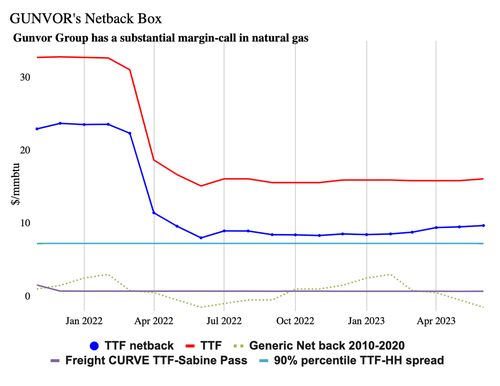 The difference between the generic netback 2010-2020 and the 90th percentile TTF-HH spread represents the profitable trading hedgeable area for the trader “in the box” and where we presume a merchant trader would put some price risk covers against the TTF to pay the producers.

As you can see the netback is now trading above the 90%P TTF-HH spread for Q4 and CAL22 leaving Gunvor with major curve losses.

Most of the people out there think the physical trader can settle at a profit if it delivers the cargoes.

This is not as simple given the financial exposure and box strategy employed by Gunvor in natural gas.

The severity, timeline length combined force us to make further determinations regarding the risk of major default.

If you are in the media/commodity headhunters/by-standers or even a Gunvor employee it’s time to pay attention right now.

The first step in our model is to determine the physical exposure by Gunvor in LNG/GAS.

-Gunvor has ~42% of its total exposure linked to LNG/GAS according to the 2019 Gunvor Group Summary.

In the absence of any disclosure by Gunvor Group and based on 2020 volume we believe it forms a conservative assessment of how the trading house sources and markets its LNG.

Thus at the present moment we determine that Gunvor has +64,509 long exposure on the TTF-HH spread falling in line with what Gunvor is (or was until last year) as the largest independent LNG trader in the world.

With the physical exposure we use two hedging models to imply the current margin calls under the TTF-HH curve.

As we stated earlier in “the box” we assume that the trader has hedged the physical netbacks at the 90th percentile TTF-HH spread. If it’s not the case we would be underestimating Gunvor’s actual margin call losses.

Gunvor uses a strip hedge and the 64,509 exposure is evenly spreaded across the curve.

With a $3.6 billion margin call it is the less severe of the two cases for Gunvor but still the TTF-HH netback doesn’t make even or below the 90P TTF/TTF line until next July which speaks for the fact that Gunvor Group is consumed by the $3.6B financial loss. 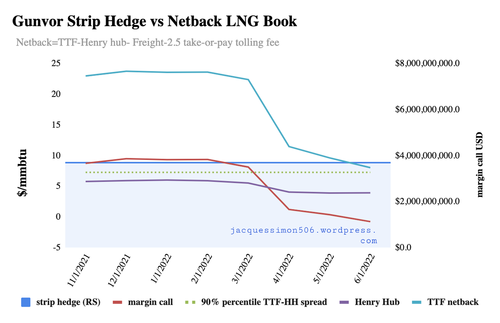 If Gunvor has elected to use a stack hedge, the Geneva-based trader hedges its price exposure on netback contracts by selling 64,509 nearby expiring month contracts.

Since the curve has inverted, and increased, the stack and roll position generates enormous negative cash-flows. Under these conditions the current margin call is $6.1B.

This is 2.5x the trader capital and Gunvor has to settle the swaps in cash at the TTF, the maths and market work effectively at wiping out the trader. 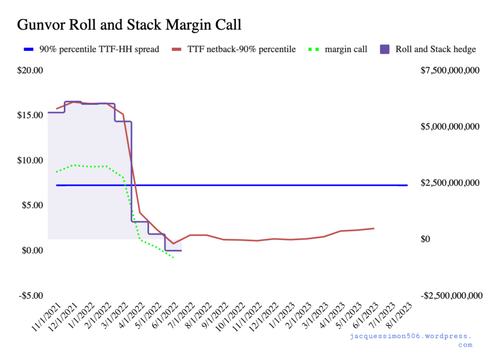 To conclude there is a catch-22 moment for the banks who have extended credit lines to a Gunvor’s model relying on cheap bank financing.

Gunvor was in fact in the debt market to finance a mega margin call on TTF/HH, JKM/HH 3 weeks ago. The verdict is that Gunvor is now boxed. We are totally unapologetic about this.

In our median estimate Gunvor faces a 5B$ capital shortfall: the trader is on a slippery slope, not capitalized at all while its margin calls will roll across several months.

Our quantitative models lend credit to the argument that TTF no longer represents the supply & demand fundamentals.

Gunvor is getting flushed. The market has a job to perform but is not done yet. For us as an analyst it has explained the extreme-volatility in the TTF gas market. 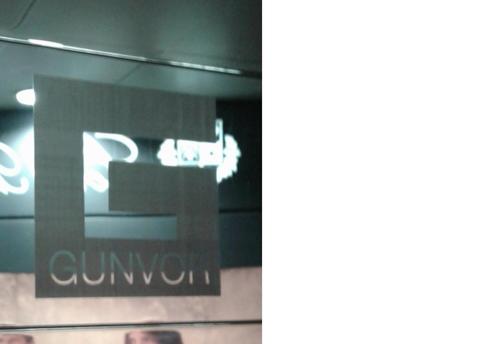 The FT can officially start to write an obituary.

Something big is coming, watch your email inbox. We have calculated the implied margin call. (If you know someone at Gunvor they’ve to take their bonus now rather than wait for 31th December coming).

“While there have been margin calls associated with the European natural gas price rally, Gunvor maintains a healthy liquidity position and instruments to manage any further volatility,”

To the contrary our credible sources indicate that Gunvor Group trading activity in Geneva is effectively frozen with its remaining gunpowder serving to manage its decay. The bonuses in arrears won’t get paid.

The trader’s future is purely and simply in the hands of Goldman Sachs, Citi and the long swap dealers at TTF. 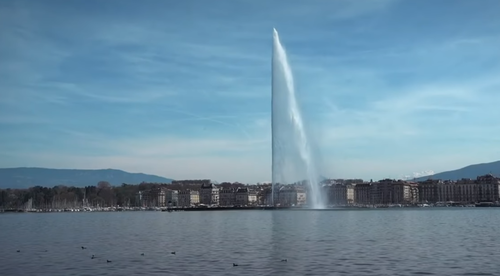