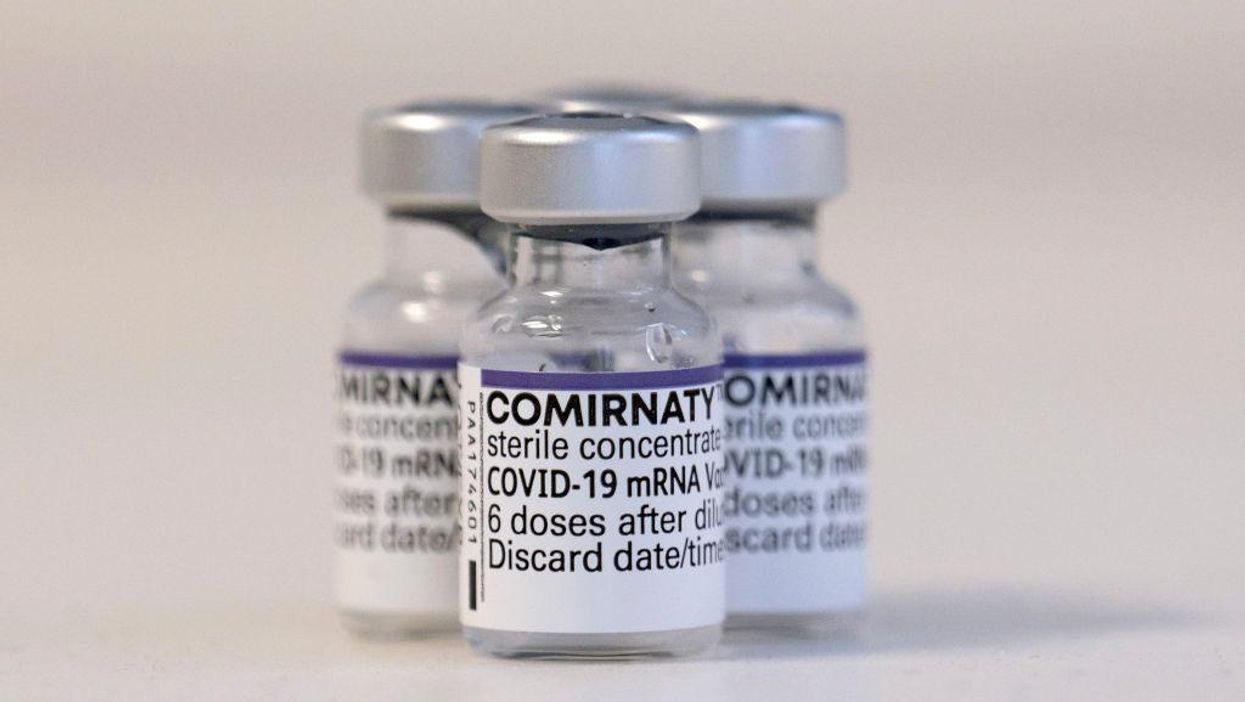 The FDA label that comes with the packaging of a pharmaceutical product is the manufacturer’s sacred writ of passage. The company cannot market the product for any indication other than what is printed on that label. When the FDA actually played the role of gatekeeper rather than collaborator, regulators made sure to print labels that only reflected the ironclad evidence of what the drug was approved for. Now, they have printed a label for the Pfizer vaccine with an outright falsehood, which will allow them to claim their shot works like a typical vaccine and prevents infection with the COVID virus, a claim even the CDC has refuted.

Here is the indication and usage printed on the official FDA label for the Comirnaty vaccine (yes, technically Pfizer’s commercial vaccine has not been licensed yet). 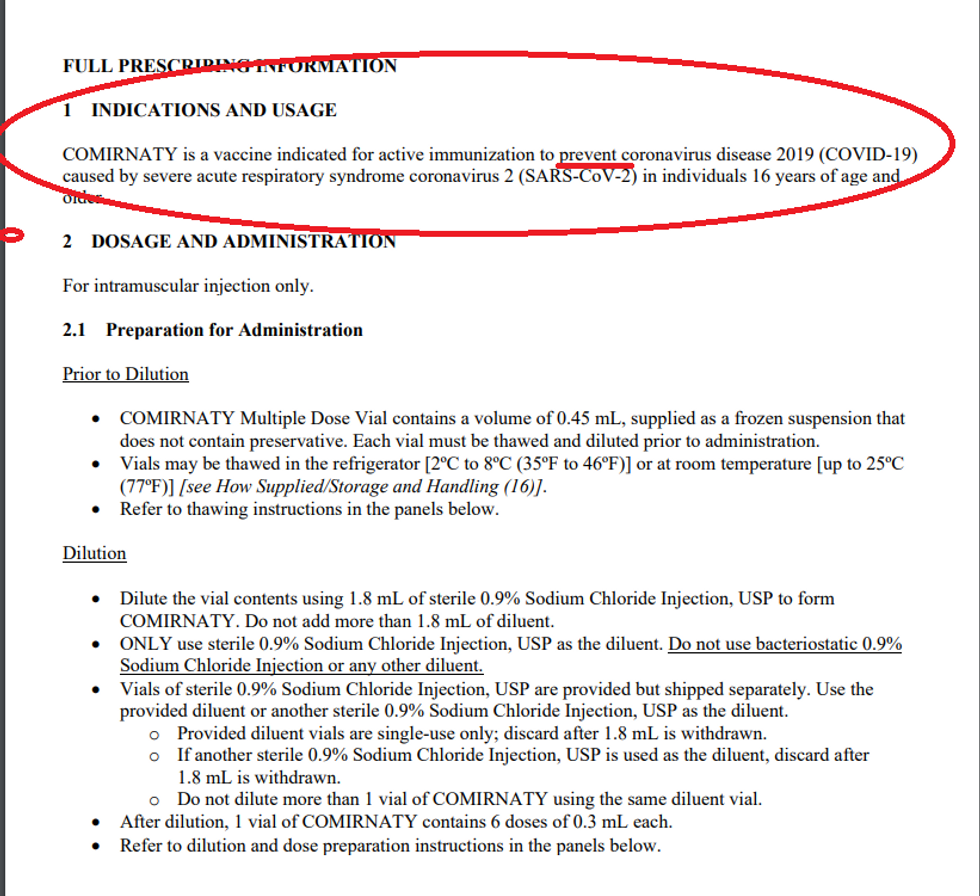 Even our own government’s position at this point is only that the shot lowers your risk of severe symptoms and mortality, not that it prevents you from getting or spreading the virus. In fact, even the protection against severe symptoms is waning. Hence the need for boosters. But how can you approve a booster of a shot that itself is marketed as preventing infection in the first place, like any other vaccine?

For example, the FDA label for Merck’s MMR shot reads as follows: “M-M-R II is a vaccine indicated for active immunization for the prevention of measles, mumps, and rubella in individuals 12 months of age and older.”

In other words, the COVID shot obtained the exact same status and language as a typical vaccine that almost perfectly prevents infection. This is straight-up false advertising. In fact, recent studies have shown that “vaccinated” individuals carry the same viral load as those who did not get the shots. After six months of this shot, Public Health England data and a study from Qatar show some age groups now achieving negative efficacy against infection after receiving the shot. Ironically, Pfizer “Comirnaty,” the shot with the label, is the one that leaks efficacy the quickest! It is simply indefensible to market this shot with the same language as every traditional vaccine. Several weeks before this label was printed in August, CDC director Rochelle Walensky had already conceded, “What they [COVID shots] can’t do any more is prevent transmission.”

If this is not false advertising in pharmaceuticals, then the Federal Trade Commission should just shut its doors. In fact, speaking of the FTC, Congress recently snuck a provision into an omnibus bill allowing the FTC to investigate, and potentially refer for prosecution, anyone who markets a product as protecting against COVID. In chilling language that we now know was likely designed by the ultimate fraudsters — Big Pharma — the bill prohibits “any person, partnership, or corporation to engage in a deceptive act or practice in or affecting commerce associated with the treatment, cure, prevention, mitigation, or diagnosis of COVID–19.”

Why is the FTC not going after the FDA and Pfizer for this false advertisement of the shots as a preventive against COVID? I can’t tell you how many listeners of my podcast have sent me updates about family members who thought they were totally protected and failed to treat their COVID right away because they thought they couldn’t get the virus. Sickeningly, the FTC has only used this provision to go after a Missouri doctor who was promoting vitamin D and zinc. And mind you, he never said the supplements perfectly prevent or cure the virus.

Ironically, one could actually more accurately suggest vitamin D prevents COVID than the shots. A meta-analysis of 23 published studies containing 11,901 participants found that one who is deficient in vitamin D was 3.3 times more likely to get infected with SARS-CoV-2 than one who is not deficient. Unfortunately, most people do not have sufficient vitamin D in their bloodstream, and that education has not been disseminated by our government, despite over 100 studies showing a strong correlation between D levels and viral outcomes.

Last year, the FDA promised it would not approve a vaccine if it failed to “prevent” disease by more than 50%. The entire approval process, which resulted in a perceived full approval on Aug. 23, was built on old data, frankly, provided by the manufacturers themselves rather than independent scientists. Now that many seniors are easily nine months into the vaccine, data from England and Qatar show negative efficacy against prevention and efficacy against serious illness likely dipping below 50%. According to Cornell researchers in Qatar, after seven months since vaccination, when adjusted for those in Qatar who already had prior infection, the Pfizer shot was -4% effective against transmission and just 44.1% effective against hospitalization or death. Here is the data from table 3 of the study, which was recently published in the New England Journal of Medicine: 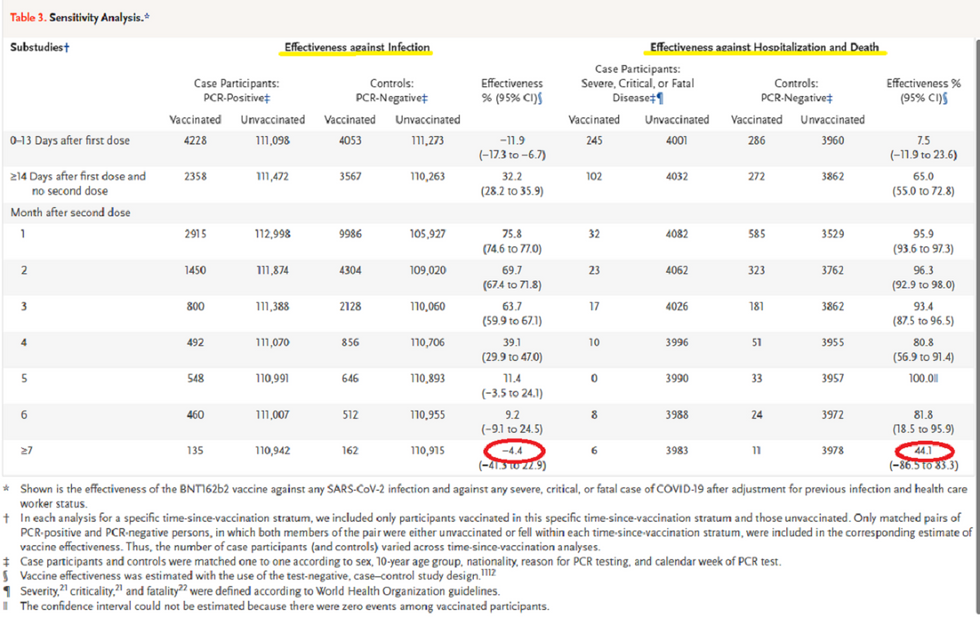 As you can see, even the efficacy against severe illness and death plummets after six months. With many people now 8 to 10 months out from vaccination since this study was conducted, the efficacy of Pfizer likely dropped exponentially more, based on the existing pattern. And if it follows the pattern of efficacy against transmission, there is a possibility that the efficacy against serious illness will eventually go negative as well, which would be a classic sign of antibody dependent disease enhancement that some have been warning about.

Thus, it is a fraud all around for the FDA to continue to allow Pfizer to market this as a vaccine, much less one that “prevents” disease like other effective vaccines that have become standard in America. It’s one thing for the FDA to market this shot as a partial preventive against serious illness for some people for a period of time. But for the agency to market this the exact same way as it does a fully effective vaccine, especially after the virus itself has changed and the vaccine appears to be making people more likely to get the virus, is criminal.

For those who believe in censoring and even prosecuting vaccine misinformation, this is a prime candidate. Then again, where do we go – to whom do we complain – when the fraud and misinformation are coming from the gatekeepers themselves? Therein lies our predicament throughout this entire hellish ordeal of the past year and a half.
Read the full post at The Blaze.