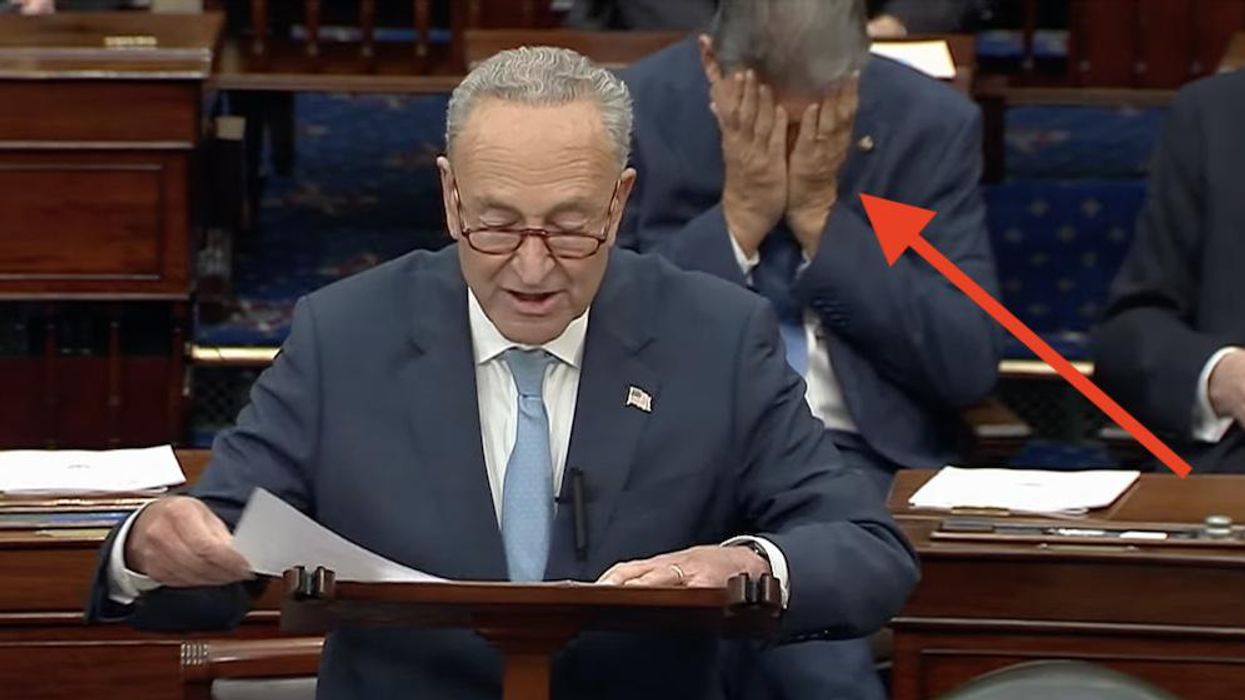 After 11 Senate Republicans voted with the full Democratic caucus to overcome a GOP filibuster of a two-month debt-ceiling increase, Senate Majority Leader Chuck Schumer (N.Y.) took to the floor to blast Republicans for playing a “dangerous” game of “brinksmanship.”

The Senate ultimately passed the bill on a party-line vote, 50-48.

His remarks did not sit will with more than half the chamber — most notably with moderate Democratic Sen. Joe Manchin (W.Va.).

And according to Punchbowl News, Manchin made his thoughts about the speech clear to Schumer, reporters, and other Senate sources: It was “f***ing stupid.”

Thursday night, after the Senate invoked cloture on a bill to extend the debt ceiling through early December, Schumer got up and gave a speech praising his fellow Democrats and ripping into Republicans — the very Republicans who just made it possible for the majority to avoid using reconciliation to avoid a potential government default and possible shutdown.

Instead, Schumer stood at his podium and declared, “Republicans played a dangerous and risky partisan game, and I am glad that their brinksmanship did not work.”

“For the good of America’s families, for the good of our economy, Republicans must recognize in the future that they should approach fixing the debt limit in a bipartisan way,” he continued.

He then lectured the GOP that, contrary to his call for bipartisanship, if they didn’t “join us,” then they need to “stay out of the way and let Democrats address the debt limit ourselves.”

Filibustering Republicans had just attempted to allow Schumer’s Democrats to do it it by themselves — by pushing the majority to use the reconciliation process, which cannot be filibustered, to raise the debt ceiling. But Democrats refused.

But no one appeared to be more upset than Sen. Manchin. Observers noted how Manchin reacted as Schumer delivered his screed.

In the video of the speech, an agitated Manchin can been seen behind Schumer shaking his head and then burying his face in his hands before getting up and walking away.

After the speech, Manchin told Schumer to his face the speech was “f***ing stupid,” according to four sources, Punchbowl reported.

On his way out of the Capitol after the final vote, Manchin told CNN’s Raju he didn’t like the speech at all and “didn’t think it was appropriate.”

“I just think that basically what we’ve got to do is find a pathway forward, to make sure that we de-weaponize,” he said. “We have to de-weaponize.”

Noting that Schumer’s frustration was probably very high, Manchin said, “That was not a way to take it out.”

“Civility is gone,” Manchin continued, adding, “I’m going to try to bring it back, and I speak out when I someone do something I don’t like.”

Manchin tells us he didn’t like Schumer’s speech after the vote to break a filibuster on the debt ceiling. “I didn’… https://t.co/FbD47DJFns