China’s cash-strapped property giant Evergrande was on the verge of defaulting on a second bond on Wednesday despite agreeing to settle debt with a Chinese bank in a $1.5 billion stake divestment deal, a move which sent Evergrande’s worthless stock squeezing higher, now up 50% from a week ago. 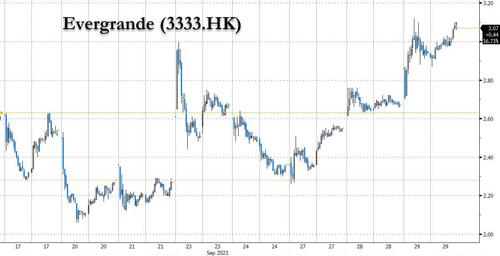 Early on Wednesday, Evergrande said in an exchange filing that it would sell a 9.99 billion yuan ($1.5 billion) stake it owns in Shengjing Bank – its most valuable financial unit – to a state-owned asset management company. The bank, one of Evergrande’s main lenders, demanded all net proceeds from the sale go towards settling the developer’s debts with Shengjing.

“The company’s liquidity issue has adversely affected Shengjing Bank in a material way,” Evergrande said in the statement, adding that the introduction of the purchaser — state-owned Shenyang Shengjing Finance Investment Group Co. — will help to stabilize the bank’s operations.

As of the first half last year, the bank had 7 billion yuan in loans to Evergrande, according to a report by brokerage CCB International, citing news reports. Other creditors to Evergrande – listed in the table below – are not so lucky as to have equity investments they can use as leverage. 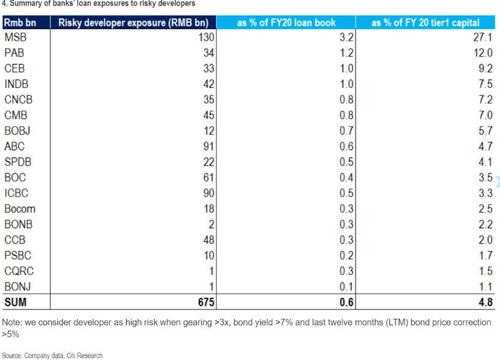 The transaction underscores the mounting pressure on billionaire Hui Ka Yan to spin off and sell assets to pay down a mountain of debt. Evergrande’s original 36% stake in Shengjing Bank was among its most valuable financial assets, worth about $2.8 billion. That holding has become less appealing as regulators toughen oversight on dealings such as preferential lending and bond purchases between banks and their largest shareholders.

The sale also underscores how Evergrande, which once was China’s top-selling developer and will soon be the country’s largest-ever restructuring, is prioritizing domestic creditors over offshore bondholders. It also highlights the role state-owned enterprises may play in Evergrande’s denouement, which as noted yesterday have been prodded by Beijing to facilitate the company’s asset sales.

Meanwhile, as of 5pm on Hong Kong, Evergrande had failed to make a $45.2 million in interest on a second offshore note, this one due 2024, according to Bloomberg. Similar to last week, there’s a 30-day grace period before an event of default could be declared. The developer’s also facing claims it’s a guarantor on a separate $260 million bond that matures Sunday.

As widely reported the company missed a payment deadline on a dollar bond last week, a day after its main property business in China said it had privately negotiated with onshore bondholders to settle a separate coupon payment on a yuan-denominated bond. Evergrande’s continued silence on its offshore payment obligations has left global investors wondering if they will have to swallow large losses when 30-day grace periods end for coupon payments due on Sept. 23 and Sept. 29.

“We are in the wait-and-see phase at the moment. The creditors are organising themselves and people are trying to figure out how this  falling knife might be caught,” said an advisor hired by one of the offshore Evergrande bondholders cited by Reuters. “They failed to pay last week, I think they will probably fail to pay this one. That doesn’t mean necessarily they’re not going to pay … they’ve got the 30-day grace period,” said the advisor declining to be named due to sensitivity of the issue.

Meanwhile, scrutiny of Evergrande’s obligations continues to mount, with Singapore’s financial regulator the latest to quiz its banks about their exposure, while Fitch Ratings has cut Evergrande’s credit rating further to just one notch above default level.

Finally, on Monday China’s central bank vowed to protect consumers exposed to the housing market, without mentioning Evergrande in a statement posted to its website, and injected more cash into the banking system. Those moves have boosted investor sentiment towards Chinese property stocks in the last couple of days, with Evergrande stock rising as much as 17% on Wednesday and up 50% in the past week.

Despite the torrid bounce from the all time lows hit last week, it is unclear if the momentum can continue. As Bloomberg’s Mark Cranfield writes, “should there be another missed deadline, the read across could be negative for Greater China equities and Asian high-yield corporate bonds. Asian dollar bonds are having their worst month since the peak of market coronavirus fears in March 2020. Evergrande may also be on the hook for a bond issued by Jumbo Fortune which matures on Oct. 3. The risks have spread globally with the Fed questioning several big U.S. banks about their exposure to China Evergrande Group. At least the company is going to raise some funds with the sale of shares in Shengjing Bank. However, to misquote Oscar Wilde, to lose one payment may be regarded as a misfortune; to lose both looks like something else”