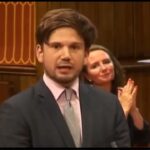 In the Netherlands the typically high-brow, polite and social society has been a little shocked at how the Dutch proles have begun to express anger toward the totalitarian dictates of the professional political class. Amid this class-driven über-sensitive social fabric, Dutch Prime Minister Mark Rutte is now in the tenuous position of holding a governmental […]

The post Epic, Must Watch – Dutch Wolverine Throws Sand Into the Propaganda of Prime Minister Mark Rutte appeared first on The Last Refuge.