Deadliest Fire In Decades – 19 Killed In Bronx Fire, Including 9 Children

Deadliest Fire In Decades – 19 Killed In Bronx Fire, Including 9 Children

On an otherwise quiet Sunday afternoon, a fire at a massive apartment complex in the Bronx has suddenly become the most deadly fire in the city in decades, casting a pall over the first weeks of Mayor Eric Adams’ tenure.

So far, 19 people have been killed in the fire, including 9 children. Another 13 are hospitalized in critical condition.

Approximately 200 firefighters responded to the building on East 181st Street where the fire broke out around 1100ET Sunday. Initial reports said the fire was on the third floor of the 19-story building, with flames blowing out the windows, according to the AP.

Firefighters “found victims on every floor and were taking them out in cardiac and respiratory arrest,” the fire commissioner said.  “That is unprecedented in our city.”

Sunday’s fire originated in a duplex apartment spanning the second and third floors,

The fire comes after a similarly devastating rowhouse fire in Philadelphia that left 12 dead, including eight children. 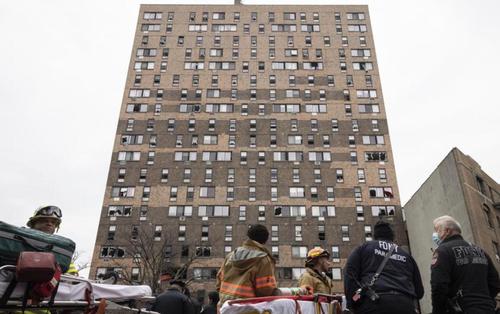 Footage of the fire is already making the rounds on social media.

Building resident Cristal Diaz, 27, told the New York Post she started putting wet towels at the bottom of her door after smelling smoke. “Everything was crazy,” she said. “We didn’t know what to do. We looked out the windows and saw all the dead bodies they were taking with the blankets.”

The 120-unit where the fire broke out is one of multiple buildings in the Twin Parks Northwest complex. It was built in 1973 as part of a project to build subsidized affordable housing across the Bronx. Right now, there’s no reason to believe the fire was “suspicious” in origin. But the cause is being investigated.