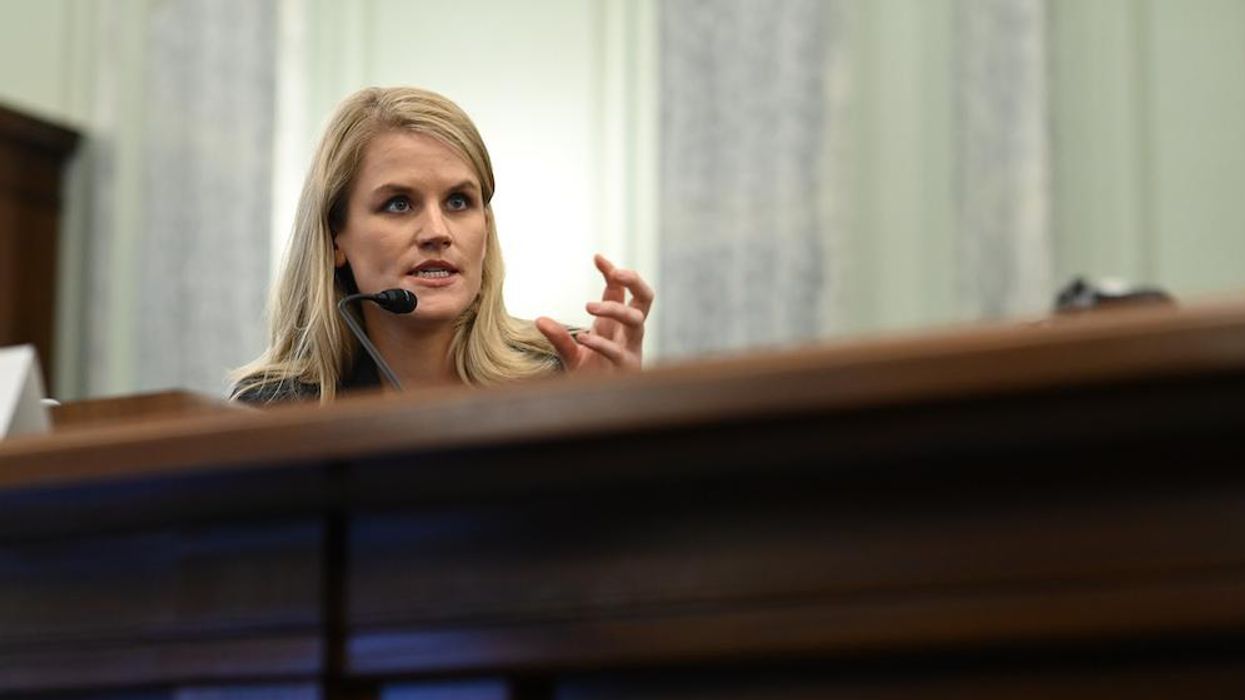 I can hardly add anything at this point to the farce that is Facebook “whistleblower” Frances Haugen, whose donations to Democratic causes as well as assisting role in perpetuating the Jan. 6 and Hunter Biden injustices are blatantly obvious, while she is nonetheless blue checked into hero status for the ongoing cause of the cult.

There is a tragic “naked gun” quality to the whole thing. The derelict cop Frank Drebin undercover as a national anthem-singing opera singer, and then undercover again as a baseball umpire, to which a fan who thinks he’s figured everything out but still has it exactly wrong screams: “It’s Enrico Pallazzo!”

It’s all just impossibly stupid. But that’s where we live now. Where the fake background that President Joe Biden regularly appears before now when doing TV appearances is way more believable than Haugen’s concern for how Facebook might be harming young girls. Back to that in a moment.

We believe all manner of nonsense these days as if we were all part of a high school or college late night crowd, where one of those hypnotists shows up and makes seemingly awake and sane people make chicken noises and do funny dances.

I mean, Biden’s insistence that everyone get vaccinated doesn’t even pretend to have the force of actual law while progressive cult storm trooper Rashida Tlaib admits the mask-wearing is all theater. Yet huge chunks of America keep believing the government and the “experts” have their best interests at heart.

The only way to kill all of this craziness appears to be through now. That is daunting to be sure, but glorious whistleblower Haugen has unwittingly given us a path. Just as my colleague Todd Erzen is fond of negotiating with abortionists by offering the rape, incest and health of mother propagandists that he will allow for those to continue if the other 99% of murders are stopped, the same approach should be taken here.

Because just as the baby killers will never take that offer and thus be forced to concede by default that they simply want to kill all of the babies, Haugen’s deep concern for the fragile souls of young girls is being used as a front for broader Facebook and internet regulation. Whose goal is to blot out all opinion and dissent that doesn’t fit the agenda of the growing woke tyranny in our midst.

OK, then. You want to get nuts? Then let’s get nuts.

Let put that very regulation on the table and say they can have it all. In fact, let’s line up as Christians and conservatives and tell the progressive mob we will leave the internet and, for that matter, the entire public square altogether if Haugen and her loyalists can do one simple thing, based on her own confessed reasons for so bravely stepping forward in the name of protecting the most vulnerable among us.

Just answer for us this simple question: What’s a girl?

You say that’s who you are worried about, right? Then finally, once and for all, please define what that is for all of us. Seems simple, but comedian Dave Chappelle has a mentally ill mob lining up against him as we speak for daring to do exactly that, so probably not. They can’t do it. They won’t do it. I promise you.

And that’s because Haugen and company don’t really care about girls or what a girl even is, which Facebook might ban you for daring to declare. All of reality will gladly be deconstructed by her cult in order to for them to be as satisfied with themselves as Thanos after his snap. They are liars. They are deviants. They are destroyers. They want to bring an end to Western Civilization.

Which is why this is going to take something more from us in response than “try to vote ourselves out of this by empowering the very Republicans who did squat about Big Tech censorship when they had all the power.”