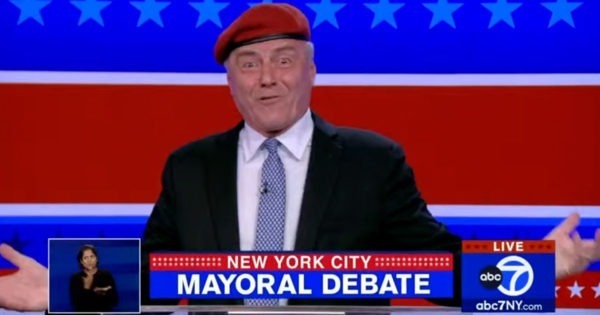 During the tonight’s televised debate between New York Mayoral candidates Curtis Sliwa and Eric Adams, both candidates were asked whether they would continue allowing a phenomenon known as “outdoor dining” in which restaurants build entire structures outside of their physical buildings for diners to eat. This was originally done to comply with COVID-19 restrictions, and now provides restaurants with additional seating.

“I look at some of these quonset huts, these airplane hangers, you could actually park a 747 in there,” said Sliwa, before adding, “That’s ridiculous.” The Guardian Angels founder noted that the phenomenon provides a safe place for drug use in other cases.

“Others, that are unused?” The candidate bellowed, “They have become shooting galleries, where people with drugs are actually shooting up in their neck. They’ve got to go.”

Then, Sliwa took an even sharper turn away from Eric Adams’ plan of allowing “outdoor dining” indefinitely: Sliwa suggested that restaurant owners have only resulted to continued use of the structures because of the city’s highly controversial vaccine passport system.

Those who are not vaccinated, or who do not have their vaccine passport or state recognized identification, are not allowed to eat indoors. This, according to Sliwa, has resulted in people choosing not to eat in the city.

"Ridiculousness that I need to show a vaccine passport to go indoors at a restaurant, and then personal ID. I just went to vote with my wife Nancy on Saturday… you didn't have to show an ID." pic.twitter.com/2YU3EgvWBg

“But to get a cheeseburger and fries? You gotta show a vaccine passport and ID.” Sliwa added, “That is crazy, and as a result, diners end up going to New Jersey, Westchester, Connecticut, or Long Island where they don’t have to show a vaccine passport or ID.” Mocking, he continued, “Is the air different, Bill? Is the air different in New York City than it is in the tri-state area? This is ridiculous.” The moderator quickly stopped the candidate from continuing.

Sliwa has waged an insurgent campaign against scandal plagued Eric Adams as the race draws closer to its finish. If elected, Sliwa would be the first Republican mayor of the city since Michael Bloomberg famously changed parties to become a Democrat.