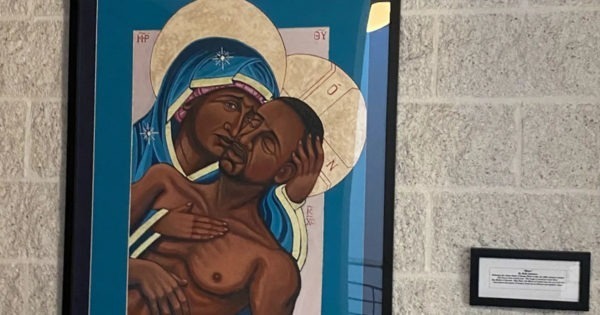 A painting depicting dead convicted felon George Floyd as Jesus Christ in a manner widely viewed as blasphemous by the Christian community has disappeared from The Catholic University of America’s law school this week, with school officials claiming the piece was stolen. The pieta painting received “universally negative” reactions from students.

The painting, which depicts Middle Eastern religious figure Jesus Christ as Floyd being comforted by a black woman, and whose creator responded “yes” when asked if the figure in the pieta is Floyd or Jesus, was reported stolen by the university in an email according to the Catholic News Agency.

“Many see the male figure as George Floyd, but our Law School has always seen the figure as Jesus,” school president John Garvey said in the email, before declaring “Some critics called the image blasphemous because they saw it as deifying or canonizing George Floyd. Some comments that we received were thoughtful and reasonable. Some were offensive and racist. Much of the criticism came from people unconnected to the University.”

In contrast to the statements made by the actual creator of the work, Garvey has also stated that “There are those who would like to see George Floyd as the male figure in the icon. That is not how we read it. The image represents to our community a good-faith attempt to include religious imagery on campus that reflects the universality of the Catholic Church.”

National File previously reported on the controversy surrounding the painting on Tuesday:

Two new paintings by artist Kelly Latimore depicting convicted violent criminal George Floyd as Jesus Christ now hang in the campus ministry office and law school of The Catholic University of America in Washington, DC, according to a new exclusive report by The Daily Signal.