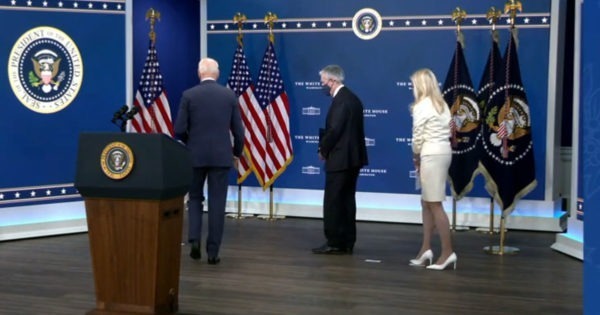 Democrat President Joe Biden has refused to express outrage or sadness or make any public remarks whatsoever regarding the vehicle rampage in Waukesha, Wisconsin last night that was allegedly carried by a BLM-supporting, black nationalist rapper called Mathboi Fly. Biden wasted no time announcing that he was “angry and concerned” over the verdict reached by the jury in kyle Rittenhouse’s homicide trial last week.

Despite the murderous rampage in Waukesha being the top trending news story in the country on Monday, and the reported political implications of the attack, Biden has refused to address the massacre on social or in person, choosing to tweet “The Bipartisan Infrastructure Law will ensure no parent will have to sit in a fast food parking lot just so their child can access the internet to do their homework” instead on Monday.

White House Press Secretary Jen Psaki stated on Twitter “POTUS that was briefed last night on the tragic situation in Waukesha and he will receive regular updates. Our team is in close touch with local officials to offer any support and assistance needed. Our hearts are with the families and the entire community.” She did not elaborate on how Biden’s “team” would offer support and assistance.

.@POTUS was briefed last night on the tragic situation in Waukesha and he will receive regular updates. Our team is in close touch with local officials to offer any support and assistance needed. Our hearts are with the families and the entire community.

Biden did appear in front of the media on Monday, but refused to address the Waukesha attack and hurried off of his fake White House set as elevator music blared.

Biden, who falsely accused teenager Kyle Rittenhouse of being a “white supremacist,” announced that he was “angry and concerned” at the democratic process and the verdict lawfully reached by the jury in Rittenhouse’s trial immediately after the news broke last week:

About an hour after Kyle Rittenhouse was found not guilty on all counts, Joe Biden was asked about the matter by a press pool. “I stand by what the jury has concluded,” Biden stated. However, the White House later released an official statement in which Biden said he was “angry and concerned” with the verdict. He still reiterated his respect for the jury system in his follow-up statement.

In a follow-up press release, Biden stated that he was “angry and concerned” with the Rittenhouse verdict while still reiterating that he respects the decision of the jury. He later urged “everyone to express their views peacefully.”