Picasso’s Napkin: Inflation is the Path of Least Resistance

Imagine you as the lover of art finally going to lunch with the great Pablo Picasso. Lunch is over and the waiter brings the check to the table, and, flush from the encounter, you reach out to pay. Picasso grabs hold of your wrist and says, “Please, allow me.” Pablo scribbles on the napkin, signs his name, and – voila – the meal is paid for. What just happened? 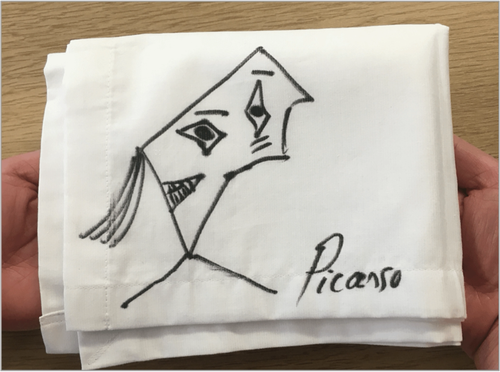 Did Picasso create an enduring art treasure that would be proudly displayed at the Prado? Or, did Picasso “print” a unit of his own currency in exchange for lunch? Whatever your interpretation, the example reveals that “money” – anything we commonly offer in exchange for goods or services – can pretty much take any form that buyer and seller choose. Napkins, digital entries on a block chain ledger, fiat paper money, whatever. So long as the parties to the transaction agree on its value, “currency” can take any form or be denominated in any unit of exchange.

Now, imagine that a whole artist colony moves into town and all sorts of signed napkins are being issued by artists, some notable, some not. New demand for fancy lunches has been created, but where do the additional caviar and extra waiters come from? The one napkin for lunch “trade” inflates to two or three. Or, suppose that no artists move into town, but wily old Picasso stays up nights scribbling on napkins so that he can buy himself a vacation house? How eager would anyone be to part with their seaside views in exchange for his napkins? That will depend upon how useful (valuable) that someone expects those napkins to be when re-offered in some future trade.

Simply put, the value of a currency today depends on people’s perceptions of what that currency will be good for – what it will be worth – in the future. The value of a currency obviously diminishes should it become “excessively” plentiful; alternatively, once the perception establishes itself that the currency will be worth less tomorrow than today, the willingness of sellers of goods to accept the money in that form devalues. What you have is a monetary inflation. Formalizing this a bit, refer to the tautology:

Adding to the “supply” of money is a simple matter of scribbling on napkins or running a printing press.

But, since Picasso napkins can be ordered up faster and cheaper than can caviar and villas, a monetary system that issues napkins carelessly will, sooner or later, inflate its currency. The new napkins – money – accrete demand. The initial impulse of suppliers is to sell more of what they have at the prevailing price. But, as the new money “floods” in, suppliers find they are overwhelmed. They can’t get the workers they need and their supply chains are jammed with orders. The only way to make the equation balance, then, is for prices to rise.

Unlike our dollars, Picasso napkins are not readily convertible into goods and services. But, are our dollars – or any fiat – subject to a different set of economic laws? Can the U.S. keep running its printing presses full bore and expect no one to notice? This is the implicit policy bet!

The cautionary tale here is that the reason it took a decade or more to extinguish the U.S. inflation of the 1960s is that once inflation gets started, it becomes its own “cause.” As prices rise, people naturally extrapolate the continuation of those price rises. The perceived future value of the currency falls and cascading distrust in the fiat alters the behaviors of buyers, sellers, and investors. If you expect your money to be worth less tomorrow, you will behave accordingly. Saving money will seem futile and foolish. Spending now before the value of your napkins – or your fiat dollars – loses still more value might seem to be the only way to protect yourself from financial ruin. The fear that your savings are being gnawed away by an inflation created, in turn, by the fear of others that the value of a dollar must inevitably drop fuels the inflation. In not recognizing that inflation is fundamentally a human “thing” and not a “technocratic” abstraction, the Fed underestimates how fast inflation can entrench itself in the minds of consumers and businesses.

Now, yield starvation and negative real rates are hardly novel. But as we peer ahead into 2022, bond investors now have to factor in the reality that, after years of trying, the policy regime has opened the tiger’s cage of inflation. And, the mere fact that the Fed tells us not to worry, that elevated inflation is just a transitory humbug, is reason enough to worry. Our national government goes on issuing trillions in “new” dollar “napkins” as it implicitly believes that artificially lifting aggregate demand solves all. The Fed’s asset purchases, which pre-tapering were running at $120 billion net per month, enable the national government to borrow funds free of market constraints, hence without putting any upward pressures on rates. It’s one big, multi-trillion dollar free lunch that never ends! Or does it? The splurge in “unfunded” Federal spending has strained supply chains, driven up commodity prices, and inflated transport costs. Widespread labor shortages have materialized for the first time in decades. These labor shortages are surely not the result of “transitory” transport bottlenecks and with some 80% of the U.S. economy service-based, suggests that wages and prices must rise further.

The Fed soothes us with the serenade that, should the tiger get loose and start devouring your savings, that they have the “tools” to get the tiger back in his cage. They would pull out their “whip hand” of monetary tightening, lose their fear of being mauled by their critics, and press forward with higher rates until the tiger is caged. So simple – in theory!

Now consider the reality of where the Fed is starting from. Bond market yields have not been this low in our lifetime and can we agree that driving up mortgage rates is no way to win friends and influence politicians? 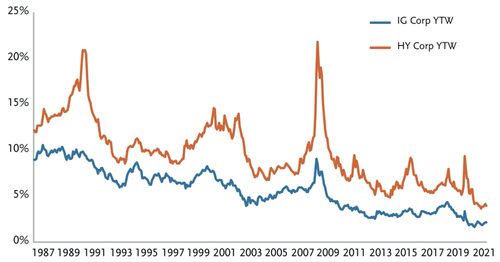 And, who knew? Asset classes do not exist in vacuo and low rates bolster asset prices everywhere. Cap rates for stabilized multifamily real estate are at record lows. How much would rates have to rise to “wipe out” a capital structure of 70% debt/30% equity? 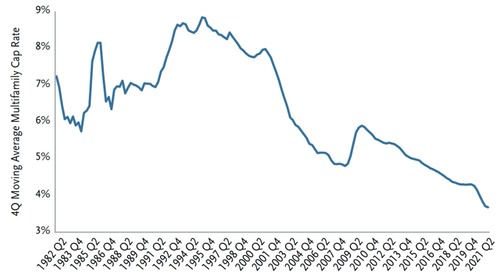 In equities, the story is similar. Take note that all the traditional valuation metrics for stocks are in their upper quintile of historical valuation, if not in their upper decile. That is, all except one: that one is the extra earnings yield that stocks possess over and above the bond yield.

Equity Valuations Expensive by All Metrics – Except One!

So, to cage the tiger “all” the Fed has to do is raise rates. Raise them enough and the future perceived value of the dollar stabilizes and inflationary expectations get re-anchored.

And the cost? Higher rates would reset asset values, possibly pricking some of the “bubbles” that have formed. Recession would follow as would higher unemployment giving way to calls that the Fed has “overdone” it and the time to loosen policy was yesterday. Absent vociferous support from elected officialdom, how could the Fed be expected to “whip inflation now?” Alas, the path of least resistance is for monetary policy to stay behind the curve until inflation becomes Public Enemy No. 1.

Is this what the ghost of bond market future foretells? Higher inflation and persistently negative real rates? Well, in the spirit of the season, we’ll channel Scrooge’s question to the ghost of Christmas 2022: “Are these the shadows of the inflation that will be or are they only shadows of the inflation that may be?” Either way, interest rates leave precious little margin for error. Asset allocations for 2022 should be re-evaluated in this light.